Being fitted up with a heart-rate monitor is not the normal procedure when queuing outside a venue, and the process certainly set up high expectations for what was to follow when actually inside the space. The winner of Les Enfants Terribles Award, The Inevitable Heartbreak of Gavin Plimsole uses these heart-rate monitors as a way to connect and interact with their audience to great effect, however never really manages to inject the show itself with any more than a surface layer of emotion. 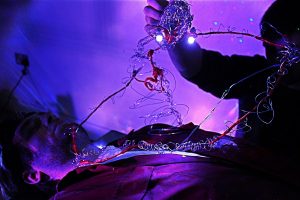 There is something in this show that hearkens back to last year’s Eulogy of Toby Peach – a performer with a critical condition using this illness as a springboard to ask big questions about life and death. Unfortunately for Sharklegs however, their interpretation of this theme suffers from many of the problems that beset Toby Peach last year – the main being that of empathy; Rhys Lawton was an excellent performer when talking to the audience and making them feel comfortable, but there was never a sense of the vulnerability that the entire concept of the show was based on. This was always a performance, it was never anything else, and there was no real attempt to make the audience even try and feel like this was real.

The idea of the heartbeats was clever and entertaining, and did make the audience reflect upon their own existence as Gavin reflects upon his, but frankly the actual rest of the show can only be classed as slightly messy. There was no unified aesthetic to try and bring different piece of the concept together – a wooden shed onstage was combined with a metal marble tower was combined with a very odd collection of what seemed like incredibly half-hearted attempts at cardboard props. The idea of making props out of substances which might be in a shed is a good one, but in this case, with lycra costumes decorated with veins and heart along with the boiler-suit wearing Gavin himself, the overall look of the piece just looked awkward and confused.
Having said this, the writing was fresh and entertaining, and Lawton was incredibly apt at weaving together rehearsed lines and audience ad-lib, making the two virtually indistinguishable. The two ensemble members of the cast, Richard Hay and Sarah Griffin, were also extremely adept at making us feel comfortable, swapping around in their various roles with effortless ease and good humour. This show could undoubtedly be made better by allowing the genuine personalities and good humour of the three actors to shine, and not trying to impose any kind of overbearing moral upon too-performative sequences.