Review of: The Calm

Produced by:
Who Said Theatre

Two stories of love in the face of war, The Calm looks at themes of memories, mortality and the melancholy of loss.

The Calm, directed by Jules Tipton, revolves around the strange balance of hope, despair, denial and emotional intensity that exists on the brink of war.

Through its dual plotlines – unravelling the mysterious past of Holly and Sam (Jennifer White and writer Ethan Taylor), and witnessing the growing understanding between the academic Scott (Simon Stallard) and the no-nonsense Ella (Rebecca Marklynn) – the play has an existential flavour in its examination of how people respond to the immanent threat of death. The precise nature of the conflict in which the characters find themselves is left purposely unclear, which allows the story to walk an interesting line of moral ambiguity. What is the conflict about? What are the characters fighting for? Who Said Theatre’s enjoyable frontline drama takes advantage of this, with discussions about whether, shorn of context, there are significant differences between the motivations of soldiers and of terrorists, and whether life can truly go on after one has killed. 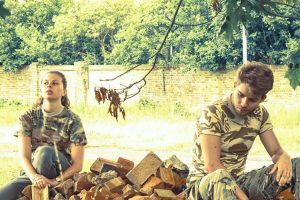 It does not seem to arrive at a particular conclusion, however. In a way, it would have been interesting had the question been given more importance, but the lack of development on this theme helps to reinforce the idea that the characters we meet are at the mercy of their circumstances; that no amount of philosophical posturing will change the fact that they are staring into the face of death, and must find ways to deal with that. Each actor’s performance reflected their character’s own way of doing this. The energy and onstage chemistry took a while to get warmed up, as is often the way in a preview show, but once it had, it became intriguing to watch. As Sam and Holly, Taylor and White played impressively with subtext, with Sam’s initial swagger becoming increasingly transparent as he buckles under the weight of his secrets, while the strength of emotions Holly cannot fully understand transforms her bored irritation into reluctant yet touching attachment. Stallard’s portrayal of Scott is somewhat less clear, and there isn’t much of a sense that he has changed or undergone any especially difficult challenges by the end of the play. This was partly an issue with the performance, but the script too was at fault – Marklynn’s great performance in the early scenes captured how both war and the medical profession can harden people and make them put up barriers, so the ease with which she came out of her shell robbed the audience (and the actors) of what would have been a fascinating battle.

The aesthetic of the play, like many at the Fringe, is quite minimalist, with a desk, some boxes and a large screen representing the beleaguered field hospital in which the play unfolds. The lighting, meanwhile, is static throughout. At the end of a scene, characters freeze momentarily after their final line, then march offstage as the other pair appear from the other side. Early in the play, this worked pretty well and kept the pace rattling along, although there were some occasions when the freeze brought the final piece of dialogue thudding home a little too hard, almost as though the characters were waiting for the audience to respond. The real problem, however, started to appear as the play continued, when the same two short, distinctive musical clips would sound every time there was a scene change… and there were a lot of scene changes. By the finale, the repetition was clearly starting to set some audience members’ teeth on edge. By contrast, the impressive opening sequence used soundscape and choreography superbly, elegantly setting the scene and mood for the piece.

It is always slightly difficult to review a preview, as there are inevitably tweaks and improvements to be made before the play is a finished product. In the case of The Calm, many of these will undoubtedly be to do with pacing, sound and the initial energy. With these addressed, Who Said’s latest effort will be free to meet its potential as a tense, haunting interrogation of the effects war can have on love, hope and identity.

The Calm will be playing at Venue 13 at the Edinburgh Fringe between the 21st and 27th August, followed by a run at The London Theatre, New Cross, between 13th and 18th September. The show runs at approximately 70 minutes without an interval. Tickets can be obtained here.