A call to arms that just falls short of its own revolutionary style.

Alice Birch’s runaway hit Revolt. She Said. Revolt Again is a multitude of things: a call to action; an examination of the limitations of contemporary feminism; our problematic use of language; a nihilistic outlook on women’s experience. I could go on. In many ways, Revolt resists categories: to say that it is about women, or about feminism, is too simple. To attempt to describe it in great detail is too complex.

The play subverts our expectations to the extreme. Birch takes tropes of good-nature that we all believe we follow and twists them into excessive situations. Basic principles are spat back in our faces as if to say: this is not good enough.

We know that marriage should no longer be about a woman’s submission to a man, but we’re shown that surrender to marrying in the first place is defeat. We know that we shouldn’t objectify women, but the text points us to the inevitable way our language is built around doing just that. We know that women should not be forced into silence, but in one scene the outcome shows that it’s better to refuse language completely than to use a harmful one.

Birch’s script is astounding, truly funny and shattering, and refreshingly aware of its failure. She cannot come up with a genuine manifesto for revolution, nor can she write a play that encapsulates the experience of every woman from all backgrounds. What she can do is surprise us with situations that go further than we would expect every time, and when, in the final scene, it is suggested that the revolution failed, perhaps this is inevitable.

Erica Whyman’s direction starts the show off with a bang, but as the script descends into puerile anger and determination and confusion, the RSC production seems to tail off more quietly. The most exciting moments are when paint is thrown, or sand, or a watermelon is chopped in half – when the play gets messy. 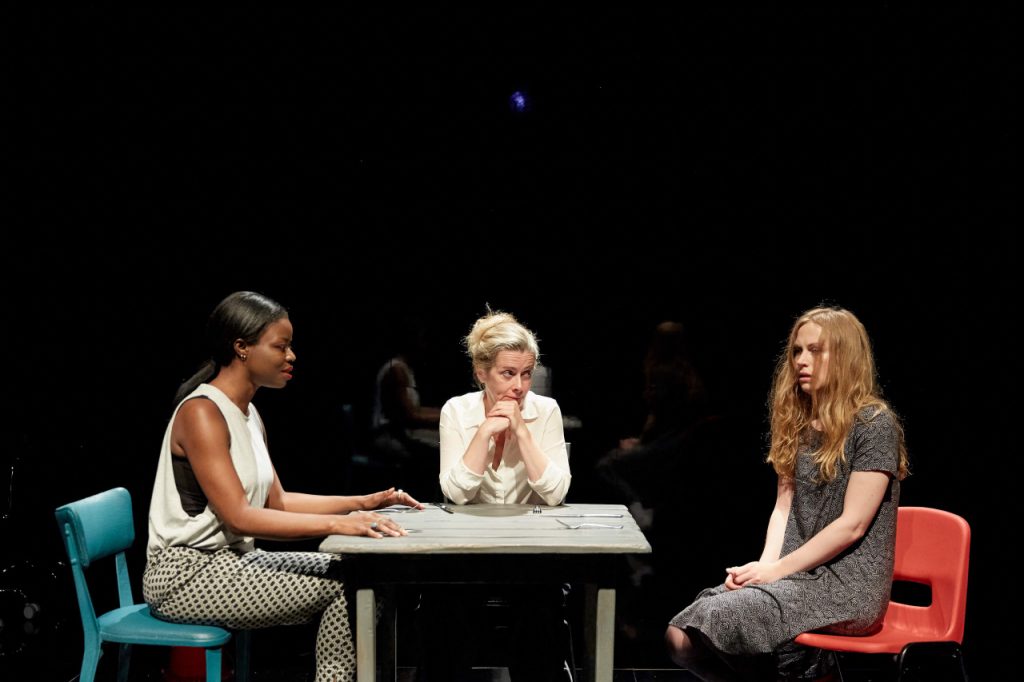 The coda of the play – a contorted mix of dialogue snippets on all sorts of subjects, the actors fighting to speak over each other – demands far more chaos than is allotted. For a text that states openly that “this play should not be well behaved”, it certainly feels like the last third could do with being kicked up a notch.

The cast give versatile performances. Emma Fielding does a miraculous job of switching from corporate-obsessed boss to giving a harrowing speech about making herself constantly available so she cannot be invaded. Emmanuella Cole , Robert Boulter, and Beth Park all start the play with comic scenes, and subtly transition us to the difficult matter of the play as it progresses. They capture the audience from the off, but, again, never quite feel like they get to let loose as they should.

Revolt is a great piece: dodging convention, taking what we think we know and amplifying it, until the world that we see on stage is an exclamation, while our own world is too quiet on these issues. However, the RSC’s production doesn’t take the show as far as the text demands. With the resounding note of Revolt being that just talking about these issues isn’t enough, and that action is needed to effect real change, it would be great to see this galvanisation represented in the production itself. Once that happens, Revolt could be truly explosive.