Review of: Red and the Wolf

A dark and imaginative re-telling of the classic fairytale Red and The Wolf. No longer for children, this gripping story is punctuated with elements of poetry, physical theatre and hideous fantasy.

‘The Forest is alive, it lives, it breaths and it waits.’ Red and The Wolf is a sinister adaptation of the classic Red Riding Hood fable in a world which exists outside time and reality. The forest transcends its setting and blurs the lines between willful fantasy and the bleak reality of war.

Red and the Wolf is devised by the cast with book and direction by creative director Beth Wood. This is Prospero Theatre’s second production in Edinburgh as they make their fringe debut this year following previews in London. They are an inclusive theatre company, meaning the cast is made up of actors from a range of backgrounds, ages and abilities but also includes actors with disabilities enabling ‘a unique perspective when devising performance’.

This is the element which really sets Red apart from the rest. It is so powerful to see such a diverse cast on stage working dynamically together as a seamless blend of disabled and able-bodied actors create challenging, dark work. Red and The Wolf doesn’t soften the brutality of war. And nor should it. 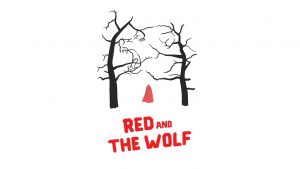 Red is on the cusp of womanhood, her mother all but destroyed by the conflict it is her grandmother she, and all the women turn to for strength and guidance. There are moments of lust and excitement as Red encounters the wolf and the story is beautifully undercut with quiet moments of warmth and tenderness between Red and her Grandmother, vital in such a stark setting.

The physical commitment from all was outstanding as the forest blurred into the wolves it concealed then back into the soldiers who were tearing it apart and the children of the conflict, neither dead nor alive but at one with the forest narrated throughout.

The action took place on a starkly decorated stage, dramatically lit and subtly underscored throughout with stunning music by David Rowan. The sound of the forest was ceaseless; a subtly unsettling score, eerie noises from the actors as hidden creatures or, most frightening of all, the forest conspicuous in its silence.

This ensemble piece was a brave and bold foray into the unknown with stunning music and strong performances depicting the bravery of the men and women ravaged by war. This is Red as you have never seen her before.