Review of: Randy Writes a Novel at Cowgate Potterow

A side-splitting puppet stand-up act that doubles as an interrogation of art's value.

If a puppet doing adult stand-up doesn’t sound your thing, just wait a second, because it doesn’t sound like mine either. What might, on its surface, just appear to be another quirky fringe act actually turns out to be a layered, loaded, utterly hilarious set of musings on the nature of art, audience, and value of both of these things. All told by a puppet.

Where to start to even describe Randy? He’s written a novel – that much is obvious. He’s a vegan, he’s purple, he’s Australian, he’s an expert procrastinator, and he’s actually very nervous about reading his novel to us. Randy uses his newly crafted book to expand his thoughts on art itself – he asks big questions about whether art has to be seen or read to be considered as art.

If this had all just been told by a real person, Randy Writes a Novel would simply be a hilarious hour of stand-up. But because these musings on art – including the best angry tirade on the publishing of Go Set a Watchman that I have ever heard – are coming from a real-life form of art, immediately the themes become more complex than just some ideas said outloud. 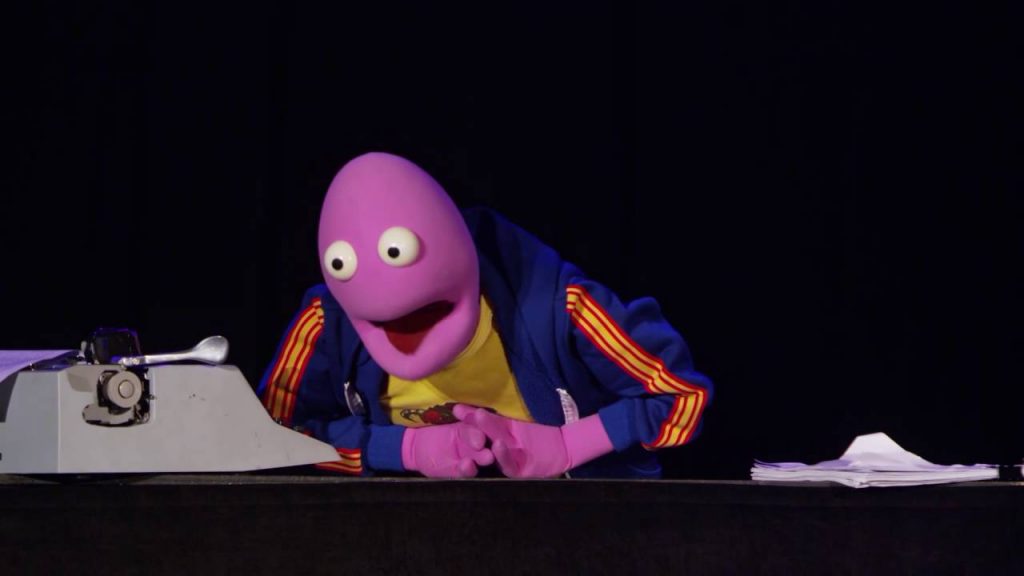 Huge praise must go to Randy’s operator, Heath McIvor. Ten minutes into the show, it’s so easy to forget that Randy is a puppet. This isn’t because Randy is realistic – far from it – but his delivery is so individual that the audience are completely on board with Randy’s odd physicality. He seems to have facial expressions, even through his face never moves. Within minutes, we are complicit in the idea that this is a form of art genuinely come to life.

The grand finale of the show made me laugh possibly the most I’ve laughed all Fringe, but it also epitomises the innate cleverness of Randy Writes a Novel. The crazy story Randy relates about buying a bookshelf from Gumtree has us captivated and in fits of laughter, and when Randy reveals (spoiler) that he made the story up, the result is astounding. Of course the story isn’t true – this is a puppet who can’t move outside the confines of his table, let alone into a car to pick up a bookshelf. And yet we believed it all the way through.

Through a combination of the brilliance of the delivery and Randy’s ability to hold the audience in the palm of his purple felt hand, he takes the audience in a ride through suspension of belief and has us laughing the whole way. Randy Writes a Novel is so certain of what it is, so confident in the themes it’s exploring, and expertly voices them in practise. It’s also stupidly funny.

If Randy is concerned, as he questions during the show, that art may not be art if the performer doesn’t take a bow at the end, he needn’t be. Randy can be certain that he has comfortably taken a front seat in his own brand of crafty comedy – even if he never actually got round to reading us his novel in the first place.