Imaginative play about a foley artist, yet slightly disappointing in the foley sections themselves.

Foley artists are regrettably not a species of thespian that I have had much contact with, hence I was incredibly excited about seeing this art form in action in Scratchwork Theatre’s Nel. However, the marketing for this piece is slightly erroneous; the flyer suggests that we are going to see a foley artist named Nel, whereas the play is actually about four talented actresses – not foley artists themselves – creating a piece about a fictional sound creator. True, these four do use microphones and soundscapes to good effect, but it is nevertheless clear that their talent lies in acting, and not the foley work itself. 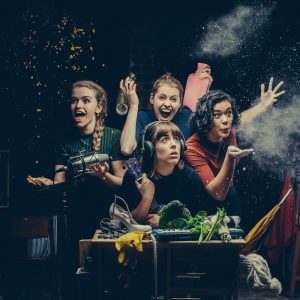 The vague direction of the plot consists of outsider and ‘uncool’ Nel, who tries to transform herself by putting on new clothes, lying to new acquaintances about her job and alienating her old friends, before realizing that she was happier when herself and ‘uncool’. So far, so familiar, but Scratchworks have injected originality in what would be a normal finding-yourself tale in the foley aspect of the plot. Sian Keen is fantastic as Nel herself, with Alice Higginson and Laura Doble backing her up beautifully in a number of roles; however, the main star of the piece is undoubtedly Hanora Kamen, whose combination of real emotion as well as comic timing makes her one of the most watchable young actresses I have come across at the Fringe.

The setup itself is equally inventive, but I do wonder whether any of these four actresses had any experience in foley before coming up with the concept of this piece. While well-done, the sounds are painfully simple, and appear in a disjointed one-after-another fashion which something like a loop pedal might have been able to fix, and elevate to another level. I’m not against performers leaving their comfort zones for shows, but for me the disappointment lay in the combination of the marketing promising a foley artist and then the enthusiastic but rather basic skills that were actually manifest onstage. This was even more of a shame when considering the impressive nature of the quartets’ acting ability and the way they manipulated the audience’s gaze with such dexterity. A highlight of this was an early cycling sequence, where we were treated to side, front and birds-eye views of Nel cycling to work in the simplest yet most effective fashion. Again, the use of lighted frames from front, back and side had a similar effect – giving what is a rather static scene a sense of movement and purpose without obscuring the effect of the scene itself. It is only a shame that the main selling point of the play, the sound creation wasn’t up to the high standard of the rest of the piece.