Review of: It Folds at Summerhall

Impressive choreography, striking images, and intelligent humour combine in Brokentalkers and Junk Ensemble’s collaborative exploration of grief and the extremes of the human condition.

Impressive choreography, striking images, and intelligent humour combine in Brokentalkers and Junk Ensemble’s collaborative exploration of grief and the extremes of the human condition. A slick explosion of visuals and sensitive interplay made this an interesting watch – however, it was slightly weighed down by its own multitude of ideas.

The images were some of the most moving parts of the piece; snapshots such as a choir of ghosts behind a young boy, three women in suits planting flowers and the appearance of the pantomime horse were peaks in the emotional landscape. The constant presence of a piñata hanging ominously above the rest of the action further enhanced the atmosphere of dark comedy and absurdity, and with the cast’s wonderful comic timing both set and action connected sensitively to the absurdity of the human condition. The first monologue, performed by a ghost, was hilarious in an extremely satisfying way, but this same humour was only carried on through the production in glimpses. I found myself wishing for some more continuity in style, finding it difficult to become emotionally invested. 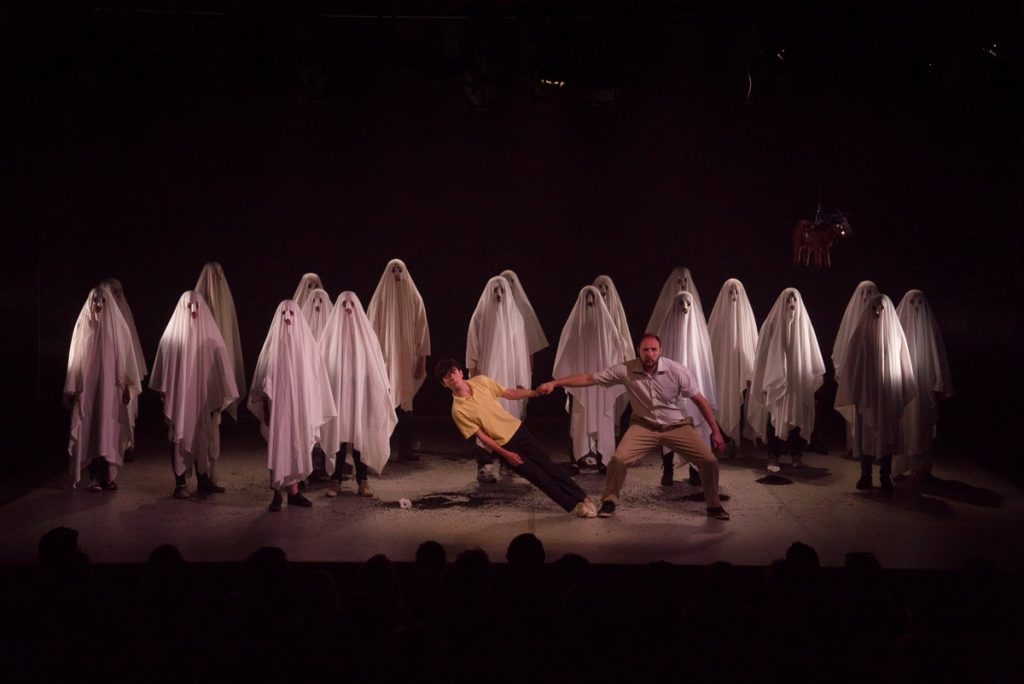 While the mixture of dance and spoken word provided different channels through which to examine the subject matter, it somewhat diluted the power of the piece. Experimenting with this mixture can be exciting and engaging, but ‘It Folds’ wasn’t assertive enough in its message to make this ambitious combination as effective as it could have been. What the audience was presented with was a collage of ideas rather than one unified concept – each idea was interesting and moving in itself, but the overall structure could have benefited from some streamlining. For example, the introduction of an entirely new character near the end of the piece confused rather than enhanced the narrative, and I left Summerhall trying to collect the scenes in my head like scattered puzzle pieces, not quite sure how to fit them together to take something meaningful away with me.

Beautifully skilful dance sections were complimented by a well-chosen soundtrack, and there is no doubt that a lot of talent and feeling is behind this production – but at the end of the day, ‘It Folds’ didn’t quite deliver on its exploration of weighty subject matter, which could have been more effective under a simpler approach.