Review of: Infinity Pool: A Modern Retelling of Madame Bovary at Bedlam Theatre

Deftly written and imagined, and stunningly realised, Infinity Pool is Alexander Hartley's pick of the Fringe this year.

Emma Barnicott works in admin support for a plumbing company on a trading estate. Her day: the banal commute, shitty office banter, circular conversations with hubbie Paul, rinse, repeat. Her colleagues are vapid narcissists; her masturbation fantasies are thwarted by the trill of an alarm clock and the unwelcome appearance of the bloke from Coast in her mind’s eye. She wants to swim out into freedom—to escape, in some vague, unrealisable way, the puddle of ennui in which she finds herself. We watch as she begins to scratch this itch via a series of increasingly intimate online messages with a builder called Kick.

Does that sound like a tumble of clichés? Keep reading. In Infinity Pool, it’s neither the age-old outline of the story nor the modern-day setting that matters, but the understated and imaginative way it is all told. There are no actors. Instead, Bea Roberts, in all black, scuttles around the stage activating a variety of screens and lights, generating settings, dialogue, narration, and even the thoughts in Emma’s head. We barely hear any spoken words—just a few answerphone messages—but it doesn’t matter: somehow, the multimedia are so carefully prepared that each of the play’s sixty minutes is don’t-even-blink gripping.

Despite the complexity of the piece, there are no mistakes. And don’t think that because there are no actors Infinity Pool is light on stagecraft. Gorgeous textures and images abound: the ASOS website projected onto the unspooling wrapping of comfort-shopped clothes; the silhouette, thrown up on a screen, of hair dye percolating in a Pyrex dish full of water. 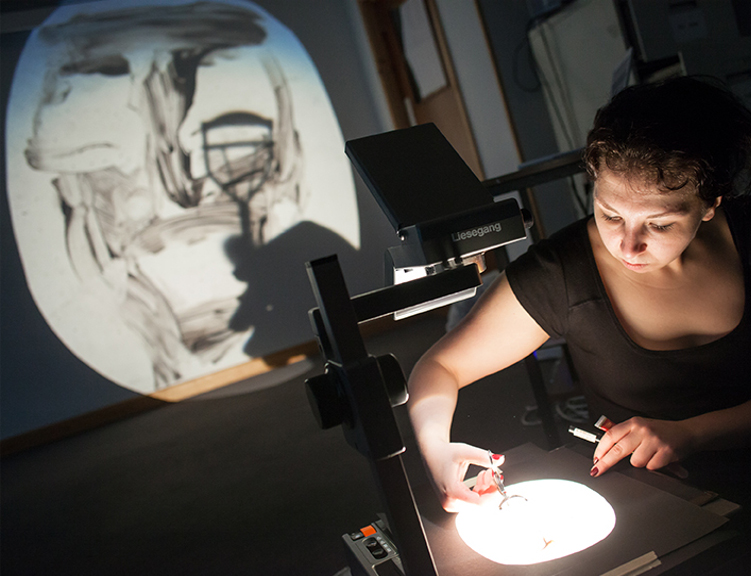 It doesn’t hurt that the writing is stunning, deft, often hilarious. The characters, even the minor ones, are shown in large-format clarity, complete with annoying verbal tics and typefaces to match their personalities. And Emma is a really wonderful creation: in her insecurities about her age, her weight-watching, her cringeworthy Facebook posts (“Never too early for wine and pyjama o’clock? Lol!”), she’s every bit as full, real and sympathetic a character as Emma Bovary and Anna Karenina.

Infinity Pool is about love, but it’s not just adulterous passions that are on display. Family relationships get at least as much attention. We see Emma in her roles as embarrassed daughter (her mum calls a mobile phone a “mobie”) and embarrassing mum (her daughter, travelling in South-East Asia, tries to gently deflect Emma’s offer of a visit). The kind of love that Emma and Paul share isn’t reduced to Fawlty-Towers cattishness and frigidity, but is told sensitively, given space, allowed to be complicated.

How could you criticise this production? I suppose you could say that its scope is too narrow, that it bites off less than it could chew. But take Infinity Pool on its own terms, and, as a fully realised piece of theatre, it is unimprovable.