Review of: In Our Hands

An inventive and beautiful story of a fisherman's life

The last show Smoking Apples brought to the Fringe was the acclaimed Cell, a thoughtful piece which used puppetry in order to explore motor neurone syndrome. After such a success, it would seem difficult to replicate this result only a year later, but the group have done exactly that with their new piece In Our Hands. This takes a slightly broader theme, that of the trawler fishing industry, but focuses in on the fisherman Alf – a widower with a slightly estranged son and huge piles of debts threatening to eclipse both him and the industry he loves. 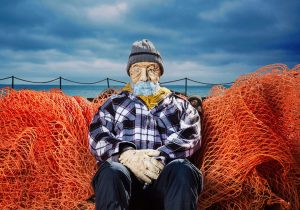 The puppetry of both Alf and his son was done masterfully, particularly because the company set up certain rules at the very start of the piece which were never broken – for example, that understandable words were only spoken on answering machines, radio broadcasts and other mechanical objects, all other scenes were communicated through murmuring and gestures. This shared rule managed to tie the puppets and the humans together and create a very visible shared world in a way that I think actually eclipsed the purely puppeteered Cell the year before. There was a generosity and a simplicity about the action that was wonderful, an understanding that was forged between performer and audience that stuck through the entire piece.

Boats crawled up and down glowing sheets of netting, fish prices were displayed on blackboards, three boxes and a reel of this same net provided the basis of set for the entire piece. However, what made this play stand out was the fact that it did not simply concentrate on the fishing industry, but had its’ heart in a wobbly relationship between father and the son that had decided he did not want to take over the fishing business. It is this relationship which formed the emotional backbone of the piece and meant that the audience properly invested in the characters, perceiving not only their dreams but also their flaws in a way that was not quite so present in Cell. However, one of the downsides of this was that the production spent so long building up this familial relationship we never actually saw one of the plot-based highlights of the piece – how Alf’s son managed to ‘make sardines sexy again’ and thereby regained his father’s love and trust. This was a sore blow, as the piece seemed to suddenly turn a corner and race towards a conclusion in around 8 minutes, slightly cheapening the incredibly complex and beautiful web of problems and relationships that Smoking Apple had spent the last 50 minutes creating.

This was a fantastically produced and emotionally hard-hitting show; the end scene when Alf changes his answerphone message to that of his son instead of his dead wife physically made me tear up. It is only a shame that the son’s solution to his father’s financial problems was never made accessible to the audience, otherwise this would have been as close to a flawless show as I have come across.