Review of: Glasgow Girls at the Assembly Hall

David Grieg's musical Glasgow Girls is staged as an ensemble piece, with the girls and their teachers doubling up as parents, home office officers, and Scottish first minister Jack McConnell.

‘What kind of country do you want to live in?’ one of the battle cries of Glasgow Girls asks Scotland. A production that aims to humanise asylum seekers, this new musical retells the true story of a group of high-school Glaswegians who took on the British home office itself. At the Edinburgh fringe, this does feel like something of a wasted question. The answer the girls obviously want to hear is a country where every child in Scotland is valued equally, and in the socially conscious Edinburgh every audience member seems to feel this way already.

David Grieg’s musical is staged as an ensemble piece, with the girls and their teachers doubling up as parents, home office officers, and Scottish first minister Jack McConnell. It all works surprisingly well, with only simple costume changes necessary to support the actors’ consistent and slick reactions to each situation. This all takes place on a giant primary school playground set – one that multi-functions just as much as the actors do. Every element of the direction, choreography, and tricky transitions are planned and executed perfectly. As a production, Glasgow Girls would easily sit in a long-running West End theatre. 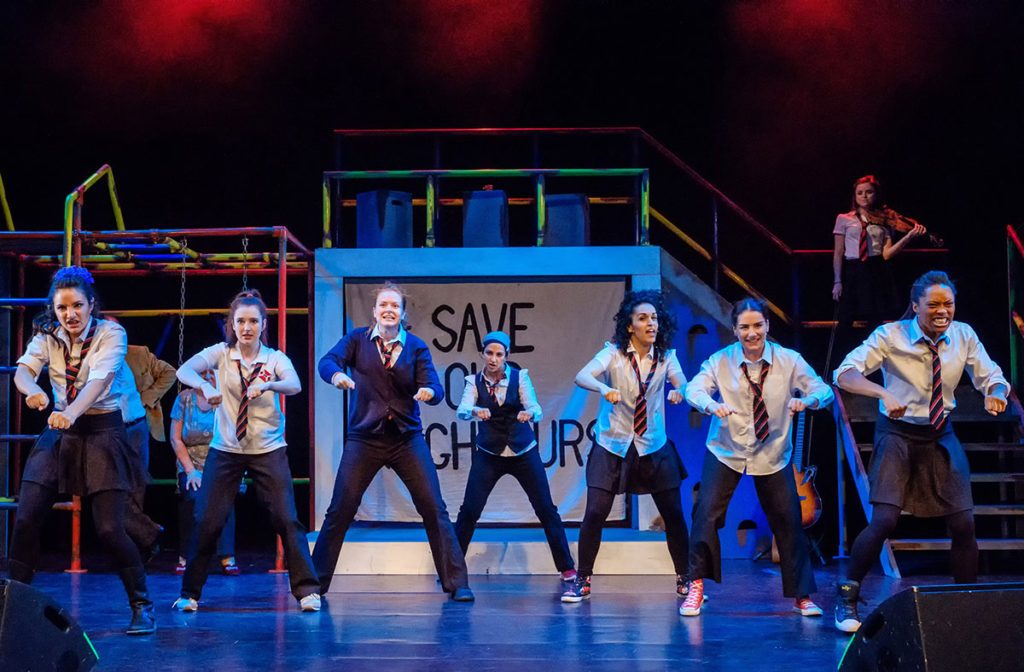 The musical itself is a predominantly beautiful tribute to Scotland’s musical heritage, with a violinist (Laura Wilkie) onstage and playing throughout. Her haunting fiddle melodies invoke folk songs in almost every scene, effortlessly tying together the themes of the play with the musical style. As the girls sing about integration and the power of together, it is the music over any other aspect that makes these themes relevant not just to present Scotland, but to its history. Sadly, there are songs in the play in which this musical style is dropped and replaced with more ‘classic’ musical theatre sounds, or even bassier dance music, an illogical artistic decision that seems like an attempt to pull in heavy crowds. A real shame, not to mention unnecessary, and the musical is most successful when it ignores all elements of musical theatre tradition.

None of this is to say that Glasgow Girls doesn’t work, or that it doesn’t achieve its aims. It’s an incredibly powerful piece of theatre, and though perhaps biased as an avid lover of the musical form, I think it surpasses the boundaries of genre. It would be remiss of me not to admit that one unexpected moment had me in floods of tears that never quite subsided. As it tours, this is a show to not miss, and perhaps more importantly to take your friends to – particularly those who are not as sympathetic towards asylum seekers as they could be.