Beautifully subtle and highly entertaining snapshot of a family trying to cope with both the past and future.

Oddly enough, the first ten minutes of this piece remind me of the opening sequence of Up – setting up an entire backstory to various different characters and getting the audience emotionally invested in them in only ten minutes is huge feat. The beginning of Giant was incredible in this regard; a fantastically well-oiled physical compilation which impressed with both style and substance, and set up the tone gloriously for the rest of the show to follow. 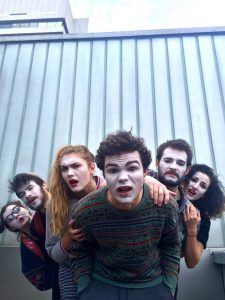 The main theme of the piece of that of Generation X (I think this is what we’re calling it now) and the lack of opportunities that seem to be facing 20-somethings in the modern world. However, exploring this theme using clowning and puppetry with some hilarious cabaret-style sequences makes it stand out from all the angst-ridden societal plays that crowd the streets of the Fringe. Tom’s story is played out against the background of his mother, his uncle and his grandparents before them, setting the generational problems that seem to be so often-heard nowadays in context and reminding a fairly student-heavy audience that the world doesn’t revolve around us. The acting is constantly excellent, and the incredibly complicated twisting and turning as close to flawless as can be imagined.

However, the magic becomes slightly unstuck around 5 minutes before the end of the show, after Tommy’s nan has died (spoilers) and he is lured to the attic. Bizarrely enough, the grand showpiece of the huge mask seems to have been included as a gimmick rather than actually adding anything to the piece; it just makes the ending detach slightly from everything which had been so wonderful before. All it does is tell us very bluntly what the entire show has been subtly and emotionally building up from the very start – that people are made out of other people.

Apart from this odd decision in tying up the story, Giant offers a beautifully subtle and highly entertaining snapshot of a small family’s life attempting to cope with the modern world. It is utterly captivating, and a play I’d highly recommend.