Produced by:
In The Attic Productions

On a late Halloween night we take a stark look at the reality of being a 20 something today. Real people, real relationships, real life.

In The Attic Productions brings contemporary drama Fingertips to the Edinburgh fringe in this new company’s debut. Only founded in March this year they have achieved an incredible amount, with playwright Naomi Fawcett and director Natalie Denton producing this piece of new work. 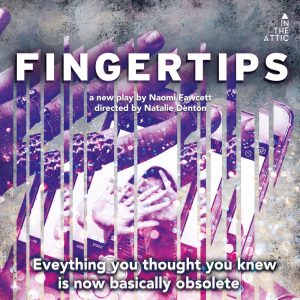 Fingertips takes a look at modern life: complicated, unglamorous and at times downright vicious. The characters are obsessed with communication in this digital age debating everything from having to take the perfect picture to the pros and cons of sexting, issues that are reflection of this generation today.

The play is set in a small flat, the black box studio space perfectly creating the intimate surroundings. The cast seemed to reflect it’s audience with a mainly 20 something crowd for whom the play seemed to resonate particularly poignantly. It seemed that every person watching could relate to the cast, from the mellow pre-drinks, the hype of the night and then the massive downer that came as tensions frayed buoyed on by alcohol.

There was a beautiful level of comic relief throughout, from the pun filled costumes (the cereal killer, the Freudian slip etc) to the fast paced, witty humour. The play was inspired by verbatim interviews and as such the cast bounced off each other in such a naturalistic way it almost felt as if the whole play was improvised and we were just guests at their party. Strong performances from all made this a joyous ensemble piece

We weren’t given a strong message to take away from the play but instead were forced to create our own from what we had seen. Fingertips touched a lot of the issues concerning 20 something’s today; “the quarter-life crisis, the dreams that we have and the fear that they might never be realised” and maybe in a true reflection of real life we weren’t simply handed a neat conclusion but were left to reflect, feeling slightly adrift alongside the people we had spent the last hour with.