Review of: Darktales at the Pleasance Courtyard

Price:
Varies through the run
Reviewed by: Alex Wood

Darktales has little to make it anything close to being the ‘scariest show’ at the Fringe - rarely more than a quick intrigue drama, wrapped up with a sprinkle of gore and knife wielding.

‘Horror-thriller Darktales is the scariest show at the Fringe! 21 years ago audience members gasped, screamed, fainted or had to leave the theatre.’

In terms of marketing material, going into a show provided with such information may lead to certain assumptions – one that, as stated in the sentence above, that Darktales will be ‘scary’, shocking, or even send a shiver down your spine. In reality, Darktales is none of these things – falling largely short of its lofty aspirations, ending up with few shocks and even fewer thrills. In this post-Blair Witch world, with Woman in Black now running for over 25 years, the horror world has moved on – Darktales clearly hasn’t. 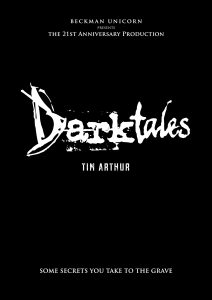 With names like Tim Arthur and Dan Clarkson attached to the Darktales name, it seemed a surefire steady 70 minutes of thrilling theatre – an elaboration on the original 1995 show with updated terror filled stories, sequences and effects. As it turned out however, the play fell into cheap, pulpy territory – a blood soaked story of vengeful writers and tragic consequences. There was no horror save a short splash of blood, no gasps, screams or, as far as this reviewer was aware, fainting.

The play had a few stabs of inspiration – the looming, exquisitely rendered set being a Fringe marvel, while the short-lived commentary on the difficulties of both the publishing industry made for some interesting ideas to chew upon.

For the most part however, this was a damp flannel of a thriller – plot lines plucked out of arbitrary and random choices, while the one female character is given an unforgivably passive role (simply as an object of desire, to be treated as an object of affection, desire or a battleground between the two generations of male characters). She doesn’t even make it onto the poster. Darktales has little to make it anything close to being the ‘scariest show’ at the Fringe – rarely more than a quick intrigue drama, wrapped up with a sprinkle of gore and knife wielding.