Review of: Cosmic Fear or The Day Brad Pitt Got Paranoia

An earnest play, held back by uneven writing and half-heartedly realised, explores our failure in the face of climate change

You’ve heard dozens of stories with a sad, clever, tortured boy, haven’t you? Perhaps you’ve even come across one such melancholy fellow, always reading Kafka and drinking cup after cup of black coffee. Often, in the stories you’ve heard, he comes accompanied by a doting one-dimensional girlfriend, hopelessly attracted to his intelligence and self-pity, who says things like “Oh, I am turned on by your helplessness.”

Five minutes in, the heart sinks as I realise that Cosmic Fear is one of these stories. But there’s a twist: this self-tortured bore eases his pain by pretending to be Brad Pitt. Together with his girlfriend and another chum, he slaps on a bad American accent and talks about making a movie that will save the world. This conceit is the basis for an hour of explorations around the topics of celebrity messianism, mental health, human interconnectedness and, above all, our horrible stewardship of the environment. 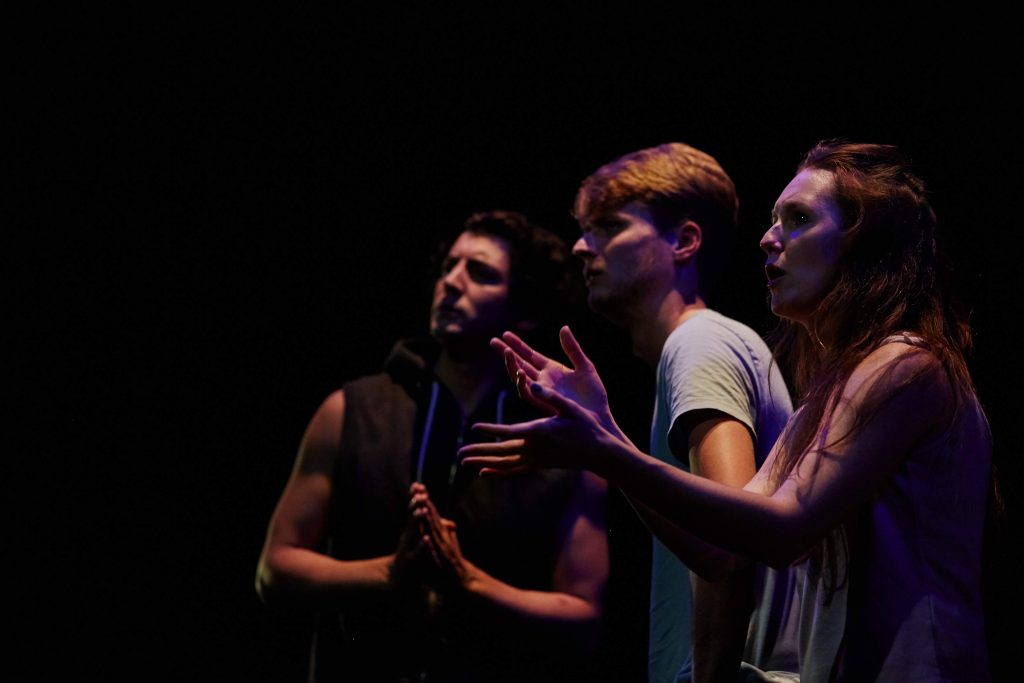 If that sounds a bit confused, it is, and I was. Empty Deck seem committed to their environmentalist message, vague as it is—they’re hosting a number of ‘Cosmic Outreach’ events around Edinburgh during August—so I guess this is meant to be the main theme. But the amount of material the play tries to get through, and the carelessness of the script that sets it all spinning, leaves the audience perplexed. There is too much idea, too little character, and the jump-about plot is bewildering.

To give it its due, the script is not much supported by the staging. There are modish tricks—filmic video-projected interventions; a live smartphone camera throwing the baffled faces of the audience up on screen—but neither really adds anything or makes the case for its own inclusion. In other respects, it’s static and conventional; Cosmic Fear wants to be riotous and experimental, but instead it feels half-hearted.

You often wonder whether the set-pieces—a panic attack, a sequence about adopting a baby from another country, mentions of paranoid schizophrenia—are grotesquely patronising and unselfaware, but the play swings round and qualifies them somehow, leaving you unsure what to think. But this sense of not knowing how to react is the play’s most successful effect. When the cast come in to the audience to confess their doubts about whether they’re doing their bit for the planet—“We literally flew here!” says one, “that’s absurd, isn’t it?”. They’re hypocrites, but we’re hypocrites too; it’s not ok, they say—they’re working on it, or they might, or they wish they would. The fourth wall is deftly broken and, through the chink, the message comes through. This is what Cosmic Fear is aiming at: to be witty, provocative, energising, while maintaining a sort of ironic awareness of itself. It’s difficult to make theatre like that, but worth striving for.