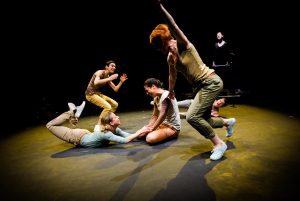 I’ve been a fan of Theatre Ad Infinitum for a while. Their 2014 show Ballad of the Burning Star was my favourite show at the Fringe that year – it combined a daring format with a breathtaking true-life story.

Bucket List has a lot of potential. It’s the story of Milagros, a girl growing up on the Mexican border in the years after the 1994 North American Free Trade Agreement was signed. Her mum works long hours at the factory, and soon pays a high price for her vocal opposition to the mayor and the oppressive factory bosses.

Milagros soon learns more about the injustices of growing up powerless and poor in Mexico. Her best friend is brutalised and stalked by a policeman, and Milagros herself becomes seriously ill from the factory pollution. When Milagros learns she doesn’t have long to live, she decides – Kill Bill-style – to find and personally take down those responsible for her community’s suffering.

An exciting, if far-fetched premise. I found myself thinking ‘I hope this is a true story’ – but it quickly became clear that it very much wasn’t.

There’s a lot to like. The physical language the company develop is very effective, pleasing to watch – and at times very clever. The central performances are believable and very effective. The songs are beautifully sung and often very funny. The scenes of brutality are dealt with very effectively, and are very moving at times.

However, the plot becomes increasingly unbelievable (and there’ll be spoilers here so be warned!). It is implied throughout the show that the whole revenge sequence is a fever dream brought on by hospital painkillers. But if that’s the case, why should we care about what happens? “It was all a dream” isn’t a fair pay-off for the audience who are heavily invested in Milagros’s suffering.

But maybe the injustice of the plot is supposed to highlight the real-life injustice. Any thoughts of retribution towards the rich and powerful could only ever be a dream. The closing image of the Mexicans resuming work in the factories seems to reinforce this fatalistic viewpoint, and the political point of the show.

Overall, it’s a very enjoyable show. The performances are fantastic, the action sequences thrilling, and the political message powerful. A shame that the audience’s investment is taken somewhat for granted.