Nassim Soleimanpour has a penchant for the uncomfortable and the unprepared.

Since 2010, his play White Rabbit, Red Rabbit has been unnerving audiences worldwide. It’s on for the third year running at Edinburgh Fringe – it’s at Assembly George Square if you’d like to check it out.

Like White Rabbit, Red Rabbit, Blank requires a new actor every day. They read the script for the first time ever on stage in front of the audience. This requires a certain type of actor, with a certain skillset – one who can bluff their way through some awkwardness, and who can keep the audience on their side through some inevitable stilted-ness. I’ve seen White Rabbit, Red Rabbit three times and had three extremely different experiences. So it’s an difficult show to review, as each show will naturally be different.

In the show I saw our guest performer was Thom Dibden, who rather wonderfully is a theatre critic for The Stage. Now he gets to be on stage being reviewed..! Thom is a charismatic, likeable man who got stuck into the text very gamely, encouraging the audience to fill in the ‘blanks’ in the story, as directed by the script in front of him. If you’ve ever played a game of Mad Libs, this situation will immediately be familiar. With audience-sourced descriptors, we create a biography for the play’s imaginary author as a celibate purple-haired German woman called Gertrude, who was born in 1632. 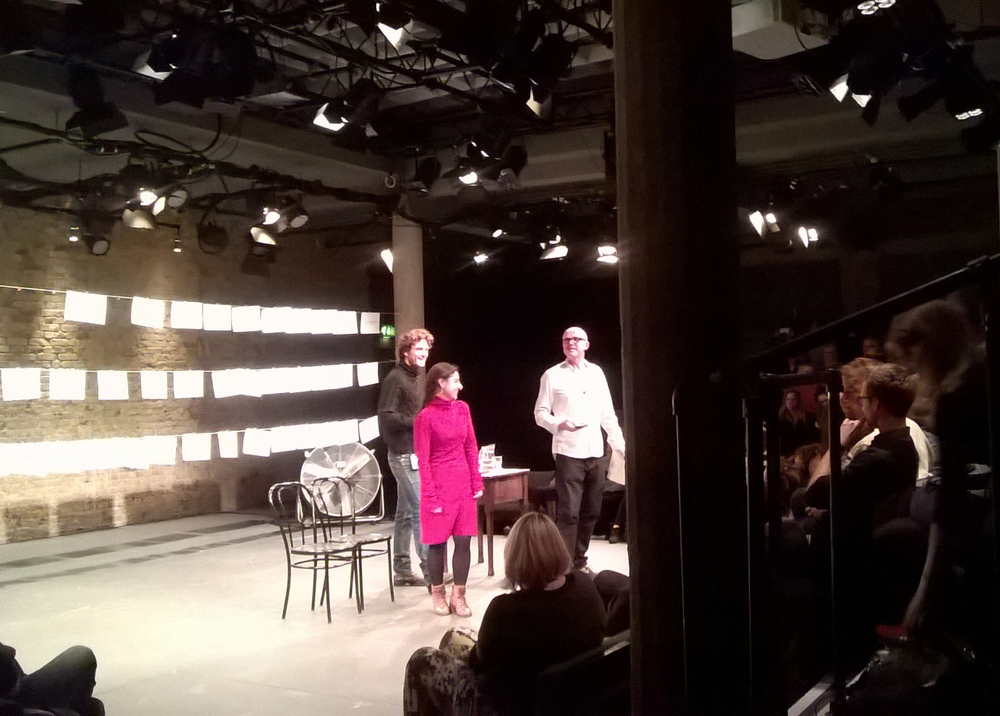 In the second part of the show, the actor calls an audience member to the stage to be the central character of the story that we as a group are collectively “writing”. However, this “character” has a lot of similarities to the audience member, as she is asked a number of awkward questions about her life so far, and then to project where her story goes next – to write her future with us.

On this occasion, the audience member selected was a 15-year-old girl, who – through absolutely no fault of her own – didn’t have much of a life story to talk about, and caused some uncomfortable shifting in the audience when faced with a few of the questions about her potential future. Thom soldiered gamely on, but frankly it was hard going for everybody in the room.

I wondered what other shows might be like, with an older, more confident person in the chair. Potentially very interesting – but the show depends so completely on the person that gets pulled out of the audience. I would be tempted to come again another night; each performance will be so supremely different that my experience in this one performance doesn’t count for all that much.

The criticism I can offer is only levelled at the writing. If a performance depends on having a likeable, confident audience member willing to talk about their life story, that performance certainly won’t work every time. For those who like their theatre experiences on the experimental side, this author keeps delivering.