Every time anybody puts on a play, there has to be some kind of reason for putting on that particular piece. This can range from having some deep moral message to wanting to make people laugh to just wanting to give the audience a good time. Sadly, after watching Beach, I neither understood what we as audience had gained from it nor even why 38 Buried Roses had decided to put it on.

Ostentatiously, the show is about various personas that people put on when they go to a shared beach and the insecurities that are visible there; however, I only found this out after reading an audience review on the Edfringe website after having watched the show. It is not that the show itself is bad, it just seem constantly waiting for some plot or some section of interest to both audience and performers that sadly never appears. The physical sections were dense and added very little, while the slightly more scene-like sections also gave absolutely no insight into why a group of talented young performers had chosen to try and depict this topic. 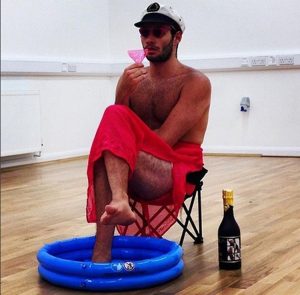 The problem was that, no matter how good the actors actually are, it would be physically impossible to shine in a piece such as Beach because of the complete lack of any opportunity to do so. Bad and good actors melded into one and the same because the material did not allow any sort of talent to shine through. Upon reading the programme and doing research into the company, these European Theatre graduates seem to have their heart in the right place, however I cannot see any European theatrical influences in their work that are making any sort of point apart from ‘look what we learned at school’. There was no sense about what the audience were meant to gain or enjoy from the show at all, and it felt more of a misshaped showcase rather than a serious Fringe show.