A manifesto of personal uncertainty is undermined by its blind spots.

A few years ago, Ava Hunt travelled to Palestine with her director, Maggie, to do some research for a show they were working on. Acting Alone presents some of Ava’s experiences from that trip, together with her stories of being a working actor. The one-woman play is first and foremost about Ava’s hesitancy and unease about the possibility of being an agent for change in the world, her anguish about the limits of theatre’s power. On this score, as a manifesto of personal uncertainty, it is sometimes disarming and often moving. Unfortunately, as soon as it begins to offer some wider thoughts about the Israel–Palestine conflict, it comes unstuck. 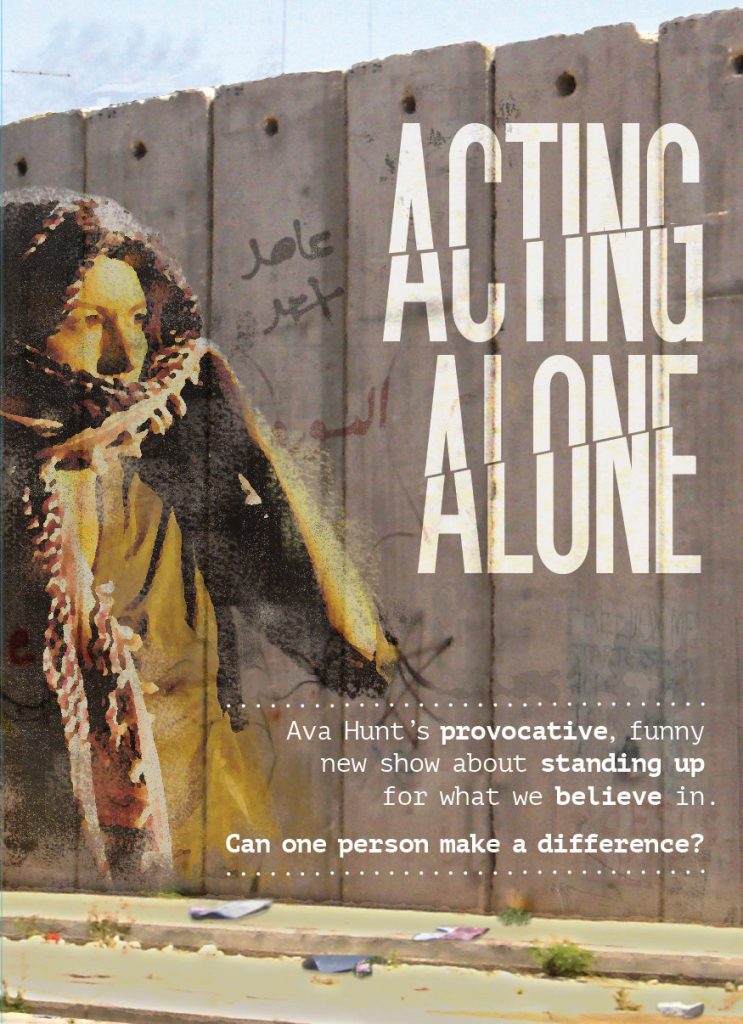 Though the play announces it is “inspired by the people Ava met in refugee camps in Palestine”, it contains only one named Palestinian. The rest are sketched in broad strokes, anonymous, vague: “We’re ashamed. We’re ashamed to be Palestinians.” Ava’s diagnosis of the political situation in the Middle East is similarly broad-brushed: apparently, the enemies of a solution in Israel–Palestine justify their stance on the basis that “there’s not enough people who want peace.”

This is colour-by-numbers politics. The Israel–Palestine conflict is complicated, and a lack of political will is indeed one of the problems. But if you want to work toward solving it, you have to try to understand its complexities, not gloss over them. And theatre that aims to make a difference should give voice to those most affected by the conflict, not to the Westerners who are free to walk away from it.

The one named Palestinian is Juliano Mer-Khamis, who founded the Freedom Theatre in the occupied West Bank and was assassinated by masked gunmen in 2011. To date, no one has been charged with his murder. Once again, it’s a story that needs to be told; you can read about the Freedom Theatre here and here. The play touches on this and many other important stories. Irena Sendler, who helped smuggle thousands of children out of the Warsaw Ghetto. Rachel Corrie, killed by an Israeli armoured bulldozer while she was trying to prevent the demolition of the home of Samir Nasrallah, a Palestinian pharmacist. The British imperial policies that bear so much blame for the region’s persisting problems. But all these stories are structurally subordinated to the overarching theme, which is the soul-searching of a Western actor; and, for all the Ava’s concern about anguish and ambiguity, they are all too often turned into parables with a single, overly simple, message.

Watching the play, you begin to wonder whether it is crossing a line from artistic license to dangerous obfuscation. Then the UN lawyer “Tony”—yet another Westerner—appears, to explain that the Israeli Government is “mainly funded by Russian Jews.” Enough. That’s flatly untrue. Why doesn’t Ava challenge it? I thought this play was about uncertainty and complexity; why is Ava reaching for the false certainty of a conspiracy theory that plays on an antisemitic trope? And—once again—why does this show about Palestine and Israel spend so little time giving the perspectives of Palestinians and Israelis?

It matters that this play is not concerned about distinguishing between complex facts and simple fictions. The play uses people’s lives as a backdrop for its consideration of a Western conscience. It matters that those people are real. It matters that they are denied their own voices. I don’t believe that Acting Alone’s heart is in the wrong place. But where is its brain?