Review of: Diary of a Mad Man at the Traverse Theatre

Diary of a Madman will undoubtedly cause a few headlines in the autumn, and is definitely worth a watch - set design from Rosanna Vize is enough to warrant an hour of theatre.

It was somewhat fitting that the last show I saw before departing Edinburgh was Al Smith’s new adaptation of Diary of a Madman, a re-formed, reincarnated version of a 19th century Gogol short story. Ever since fleeing back down south to the capital it has stayed with me, something to chew on, grapple with, dissect even as it proves consistently elusive. Many have tried to quantify the piece through comparison (the most obvious of which, as will become apparent, is Miller’s Bridge, though I like to think there’s an inkling of Jez Butterworth’s Jerusalem nestled somewhere beneath the narrative conventions), but this show doesn’t sit well amongst other theatrical performances or even other shows at the Fringe – its scope is much broader than this.

It is by no means flawless – some scenes grated considerably (the lighting designer deciding that a flashing light and red filter were always going to be the sure-fire way to depict ‘madness’ on stage), whilst almost without fail every scene felt unnecessarily cut short and too brief. Every blackout saw me wince at something that, though poised on the precipice of the incredible, was then mercilessly cut short by Smith’s authorial whims. Just a few lines more would have some times sufficed. But alas – maybe there’ll be a longer version when the show makes the pilgrimage south in the autumn. 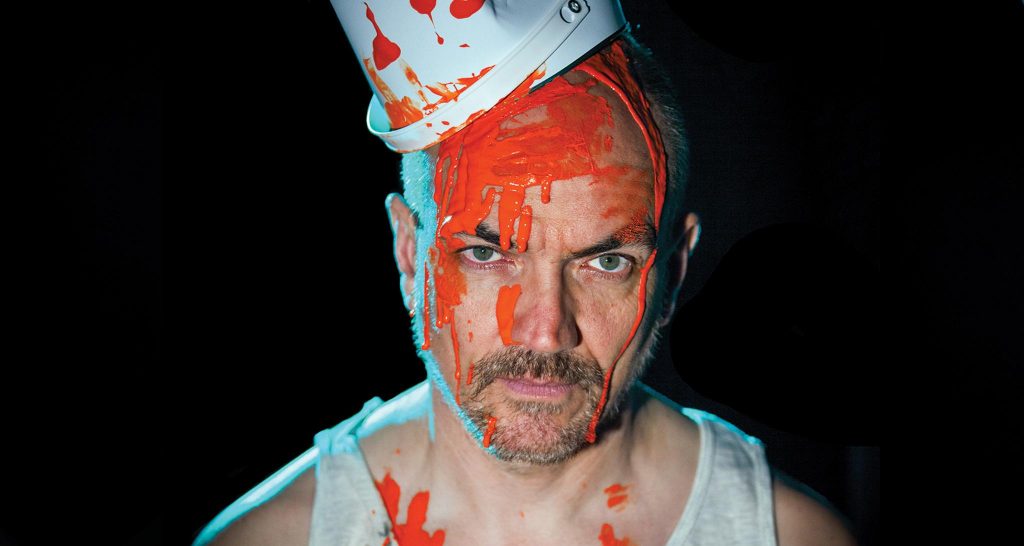 Diary of a Madman is a play that confronts nationalistic sentiment with a heady mix of depictions of regional pride, alongside discussion of mental health. Beneath that were enchanting, wonderful tales of Scottish folklore, each embellishing and grounding the show in its context. It’s a bubbling, risky concoction that had every opportunity to spill over into something deeply problematic, but for the most part stayed within the remits of accessible, vital commentary.

Our titular Man, Pop Sheeran, spends his years coating the Forth Bridge with paint, annually travelling from one end to the other with a fresh lick, like some modern day Sisyphus, now transported to a rural Scotland. His meticulously created mental balance is almost instantly disrupted by the arrival of a southerner, a foreign agent in the form of an English student on a work placement at the Bridge, who attempts to innovate his practice and, at the same time, have sex with his daughter – a set of circumstances that drives Sheeran to a level of mental anxiety and fury (hence the rather opaque similarities to A View from the Bridge, though here perhaps even more literal).

Liam Brennan’s Sheeran shines through the waves of thematic mist – a measured, contented man somehow obsessed with his heritage, fulfilling a duty he sees as a vital continuation of his family line. An underlying delicacy in the early scenes only makes the character’s psychological transformation all the more pronounced. Again, the brevity of the scenes almost cut short many of Brennan’s best segments – he could have been watched for days.

It seems that, fundamentally, Al Smith has poured these huge ideas, each amplified in the wake of two incredibly controversial referendums, into a domestic mixing pot, and never really given the show the thematic conclusion it deserves. It prevails as both a defence of Scottish values regarding autonomy and independence, while also emphasising how much of an illusion national identity can be. Paradox is in itself exciting, but is often misinterpreted as a lack of clarity. By the same token, a lack of clarity in a piece of theatre can be passed off as a deliberately paradoxical piece – it’s hard to settle on an apt review perhaps.

Diary of a Madman  will undoubtedly cause a few headlines in the autumn, and is definitely worth a watch – set design from Rosanna Vize is enough to warrant an hour of theatre. But don’t expect any answers, or even a clear commentary on the key issues – the show rests on a bedrock of uncertainty, shifting and quaking with every beat. Art as a reflection of reality, it seems.