The family & kids show The Gruffalo is transferring to the Lyric Theatre in the West End. Steve McCourt, who plays the Gruffalo, was kind enough to shed some light on a part of the industry that is incredibly popular but which is rarely receives much public attention. The family theatre industry is a huge employer but it’s not often a sector that many aspiring actors consider when they enter the industry. He caught up with Charlie Chitty, and took some time to answer his questions. 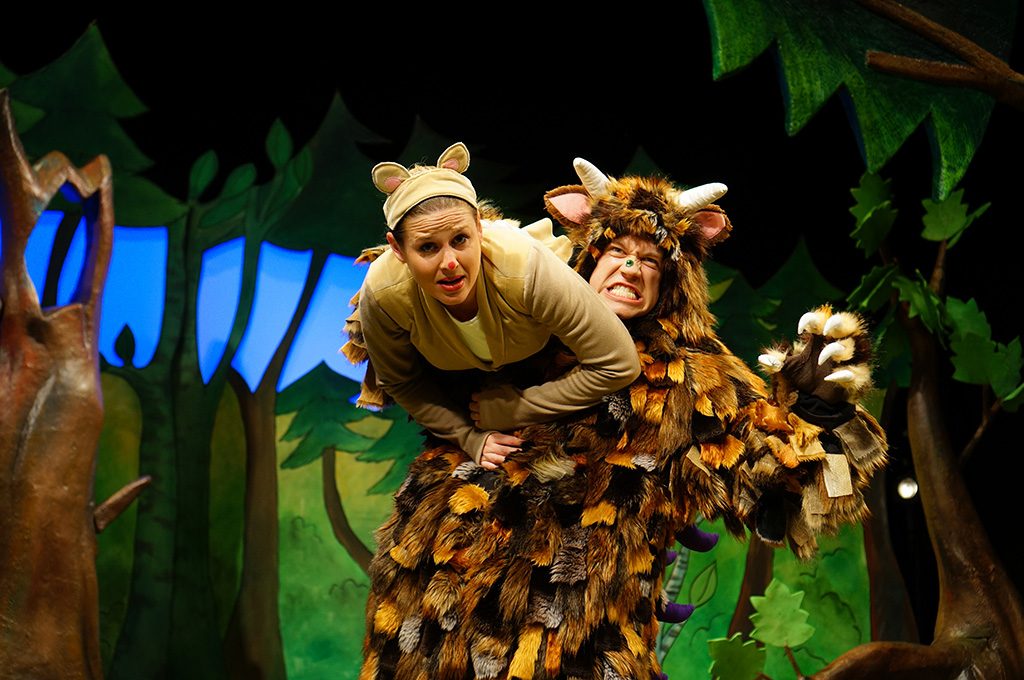 Theatre Bubble: How has the run gone so far?
SM: It’s been fantastic! The audiences have really been on board with the show; it’s amazing how many under 5’s have the whole book committed to memory.

TB: I remember my nephew seeing Jack and The Beanstalk. He got so terrified of the man playing the Giant he had to leave and he wasn’t the only one! How do the kids react to The Gruffalo?
SM: More often than not, they’re over the moon to see him finally bound onto the stage. Sometimes, it’s clear that some of our younger audience members are a little wary, but they soon settle when they realise that he’s not as threatening as his terrible tusks may suggest.

TB: How would you deal with an upset child in the audience?
SM: Unfortunately for Gruff, there’s not a huge amount he can do to appease those kind of situations. Any attempts to move closer and calm an upset child can just make things worse. But to be honest most of the small people in the audience are nervous but excited to see the Gruffalo – and his entrance is greeted by excited laughter as opposed to tears!

TB: The Gruffalo is very different to a lot of your work. What attracted you to this family oriented production?
SM: I’ve always adored family theatre; it’s been a bit of a ‘career goal’ of mine to be included in a show like this one. The Gruffalo is part of a small cluster of plays geared towards a younger audience that are created to be enjoyed by adults and children alike. It’s rather lovely to be part of a show that can make three or four generations of a family all belly laugh at once!

TB: What do you think have to be the key talents of an actor going for a lead role in a family oriented production?
SM: Ultimately, I think that family shows require the same levels of commitment as any other piece of performance. I’d argue the only essential would be openness to children’s perception of the show. Each child reacts very differently; for many, this is their first experience of theatre. Knowing how to gauge your performance to your audience is the only thing that really springs to mind.

TB: Can you see yourself moving into children’s television?
SM: It’s not really something I’ve ever thought about. Although I would love to experience life on camera, working in theatre has always been my main ambition.

TB: Would you say your background in directing, musical work, your quite full list of theatre practitioner work (Your website is impressive, by the way!) has influenced your approach to the role you’re currently working on?
In most of my work, the focus ends up leaning towards physical and spatial storytelling. The Gruffalo is no different. The foundations of this show are comparable to most of my other work; a strong sense of ensemble, a physical approach to storytelling and a genuine love for the story we tell. So yes, previous work and learning have quite heavily influenced my work on this show.

TB: What do you find yourself doing as an actor that you might not have done five years ago?
SM: Oh, hard question! I think I’ve settled into working as an actor much more since leaving drama school. Ultimately, I don’t worry as much! A huge amount of the working process is about trust – trust in the play, in your fellow performers, trust that everyone around you is working towards the same goal. Once that trust is established, there’s no point in worrying; someone will always have your back!

The Gruffalo runs at the Lyric Theatre in London until 8th January 2017.