Ignore ‘the process’; ignore Doctor Who - Unreachable is a joy from start to finish. If you’re not grinning ear-to-ear by the interval, sue me.

The process behind Anthony Neilson’s latest offering at The Royal Court has been the subject of much critical speculation. The script for Unreachable was still unfinished (the irony certainly not lost on the company, or the audience) a week before opening night, and based on the insights offered by The Telegraph at that time – which barely glanced the principal thrust of the finished piece – it was considerably nascent even then. “You have to bollock-scramble, but you do get it on,” explains the director; the play emerged from six frantic weeks of improvising, experimenting, and playing with the story, during which Neilson gradually (and sleeplessly) transcribed the rehearsal process into a something more distinct.

It is tempting for a reviewer to become preoccupied by this controversial method – especially because the resultant narrative does not read particularly compellingly. Matt Smith plays an obsessive, petulant director – and recent recipient of the coveted Palme d’Or – desperate to attain the “perfect light” for his new post-apocalyptic thriller. Eyes roll already. Unreachable, however, resists cliché at every juncture, because it sees it coming from a mile off. Smith’s dogmatic director is called ‘Maxim’; props are plastered with white labels to identify their role in the play; the stage managers are given a prominent performative role in the sparse landscape of the filmmaker’s studio. This meta-theatre isn’t cynical, or wearily smug (the National’s Threepenny Opera has that covered); it seldom even becomes masturbatory. The cast are having too much fun for that. Neilson doesn’t ask us to smile wryly; he tries to make us laugh. 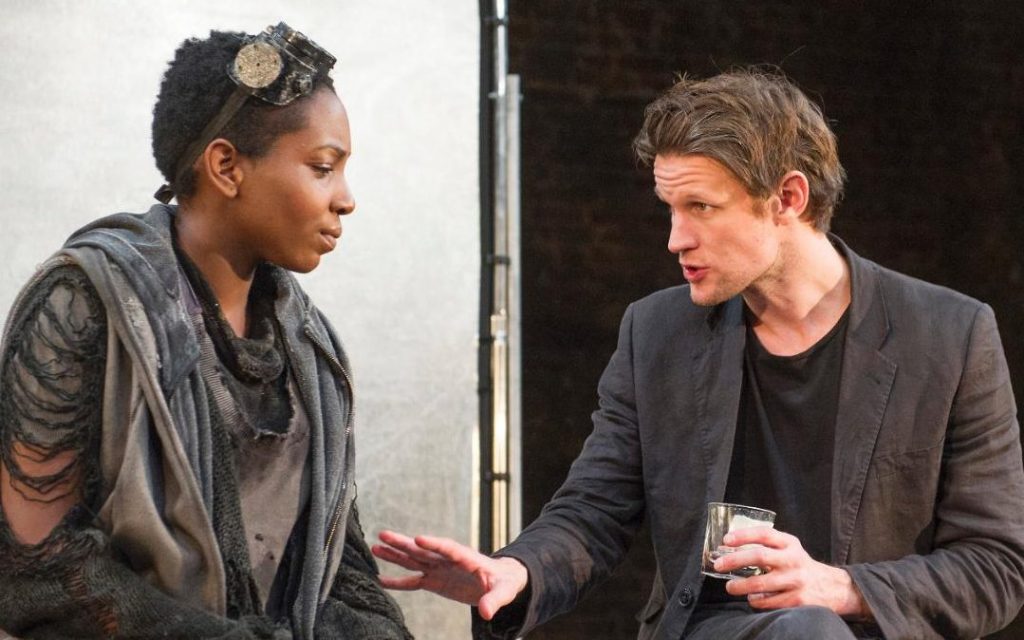 If the audience get fatigued by Smith’s 150-minute Hamlet audition, Tamara Lawrence’s compassionless young actor is on hand to deflate his artistic pretensions with an incisive remark. Amanda Drew stands beside as a long-suffering, mothering producer, whose affection for the neurotic Smith and fondness for a fight enjoins her to indulge Maxim’s preposterous whims – but she, too, is not short of withering put-downs: “You still don’t know what endears me to you Maxim, and it’s repulsive when you get it wrong”. Jonjo O’Neill – whom Smith consulted before accepting the role – is machismo in a wig, revelling in the ludicrous caricature of Ivan, gleefully detonating what was left of the “4th wall” and challenging his fellow performers to keep a straight face.

It doesn’t matter when the cast break into spontaneous laughter at something O’Neill might have thought of on the spot, because the characters often feel intimately close to the actors that created them. In particular, when Natasha, Maxim’s leading actor, dismisses his idea that she is ‘channelling anything’ when she performs an emotion onstage (“If you want me to feel something, pay me”), something feels intensely personal. Her character began the play standing in front of an invisible audition panel who communicate via intercom: a template that fans of People, Places and Things will recognise. In discussing her struggle with empathy, Lawrence (who graduated from RADA only last year) seems to hint at the emptiness of the actor – their inability to introspect – in a way that is reminiscent of Denise Gough’s turmoil as Emma. Devising allows more of the actor on the page.

Neilson has achieved something remarkable: a play about a narcissistic creative that manages to be absurd, self-deprecating, delightfully funny and occasionally profound. It’s certainly not complete – but then, why should it be?