Review of: The Plough and the Stars at the National Theatre

The Plough and the Stars ﻿is a play that has to resonate on a character level for its full message to be heard, and somewhere between the gunshots and the artillery shells, some part of this seemed to be lost.

The Plough and the Stars is a play revered almost as a historical artefact nowadays –  cast alongside W.B.Yeat’s Easter 1916 as a self conscious Irish critique of the events of those bloody few days in history a century ago. Sean O’Casey’s text is a thorough one – cutting a deep slice through Dublin society both in the run up and during the Rising itself, delving into characters of different social circumstances, political aspirations and religious beliefs. To see the show revived on the Lyttleton Stage is to be presented with an expansive exploration of Dublin society – gargantuan and skeletal sets housing citizens and events that are now analysed not as a human tragedy, but through the lens of causation and consequence.

In a year now dominated by a political sphere floating on a new raft of questions and anxieties, it is easy to forget the events of a century ago. O’Casey’s context is therefore a strange one – The Plough and The Stars, written in 1926, could not have predicted the ensuing 80 years of Irish conflict that, even now, dominates headlines. As a result, as an audience member it is easy to slip from the presented narrative and outward – into the historical and political circumstance – the characters, no matter their stories, often end up existing as symbols, reflections of the 1916 events.

O’Casey’s text is four acts of a domestic setting devolving into destitution. By 1916, Ireland had already endured a whole century’s worth of unrest and economic subjugation – circumstances that cannot be forgotten with Vicki Mortimer’s design – paper peeling from walls, naked bricks the only reminder of shattered walls – this is theatrical realism at its finest; a mammoth depiction of early 20th century Dublin, half gutted like the carcass of some great beast, with Irish men and women scurrying to find safety in the midst of battle, both ideological and military. 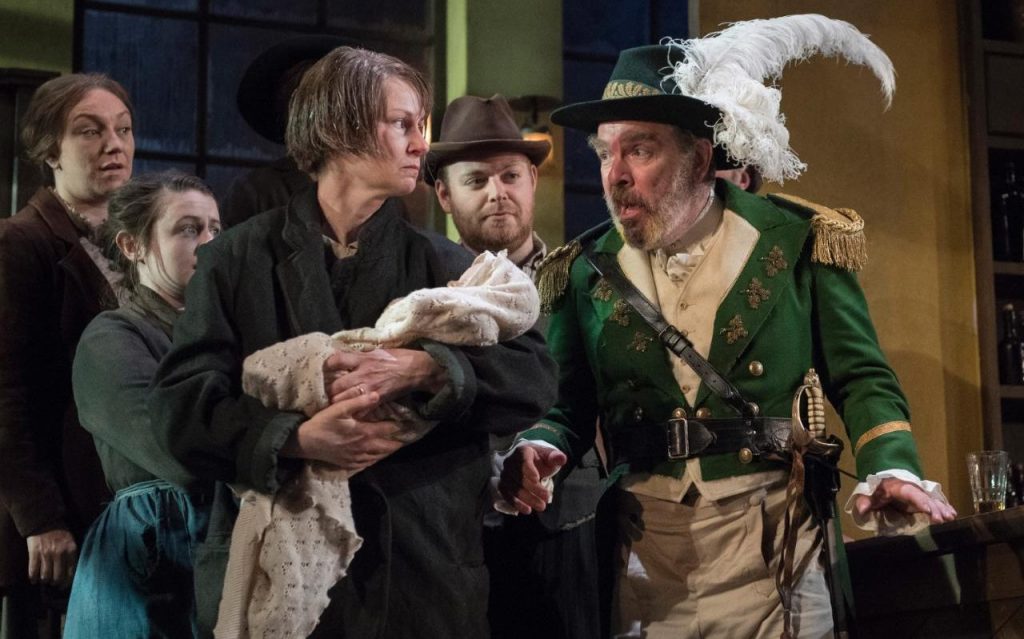 There is an uneasy tension between the narratives as a performance, and the historical significance of 1916- one that directors Jeremy Herrin & Howard Davies, now veterans of the National’s various stages, only partially manage to breach. It is through stabs of brilliance that the play springs into realism – with performances from Judith Roddy imbuing a form of physicality and character transformation that transcends any historical context and reflects a real and human tragedy. Stephen Kennedy too had a bumblingly relatable manner, bubbling into anger when prompted. There is certainly humour to be found through the physicalities and actions of these characters, but this was used almost exclusively to make the tragedy all the more pertinent.

There is an undercurrent of instability, of injustice, and self interrogation throughout the play – a crushing set of historical circumstances that means the show always feels dwarfed somewhat by the events it is trying to depict. When presented on such a great scale, the characters can feel somewhat lost or drifting rather than fixed concepts – a difficult scenario to remedy given such grandeur and scale of loss. The Plough and the Stars is a play that has to resonate on a character level for its full message to be heard, and somewhere between the gunshots and the artillery shells, some part of this seemed to be lost.

This review was organised with Theatre Bloggers, a fantastic organisation for giving writers the chance to see shows at institutions like the National. You can check them out at www.theatrebloggers.co.uk