Review of: The Kreutzer Sonata at the Arcola Theatre

The Kreutzer Sonata contains perhaps one of the best performances of the year, and for that alone is well worth watching. An exhausting, emotional experience that delves into forms of paranoia.

There’s something rather special about Greg Hicks – an actor tirelessly immersing himself in role after flawed role. His newest spell at the Arcola is a testament to this – a claustrophobic, nuanced adaptation of Tolstoy’s The Kreutzer Sonata laced with masculine paranoia and fragility. It’s a powerfully constructed portrayal by Hicks – a one man performance of an incredibly flawed man.

Tolstoy’s short story, first adapted by Nancy Harris five years ago, is one of a Russian narrator Pozdnyshev, tormented by the musical endeavours of his wife – an endeavour he believes runs alongside infidelity and an affair. As his jealousy for his wife and her musical partner grows, we as an audience are almost instructed to expect the worst from our protagonist – all resulting in a quiet, tragic climax that is delivered with a completely understated conviction. 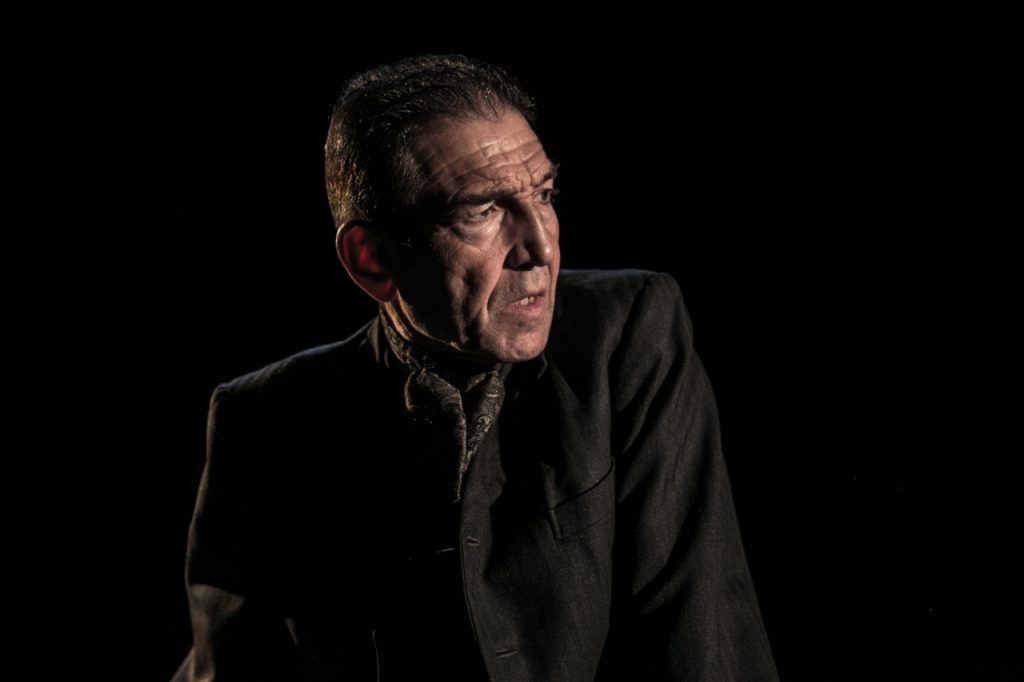 Physically Greg Hicks is an actor capable of creating something from very little – his quivering, taut bottom lip often serving as the sole conduit for a vast number of pent up emotions and feelings, his straddling and sidling across a single train station bench the most explicit depiction of his agitation. Director John Terry certainly knows how bring out the best in Hicks – never asking him to do too much, always relying on the actor’s own talents to see him through. It’d be interesting to see just how much of the show was blocked – only a few moments of physical transition (Hicks would stand, before sitting a few emotional beats later) seeing to be the only indicators that there was any regimented movement coordination.

For a play that is conceived on ideas of musical intimacy, the choice to have two musicians positioned at the back of the stage worked nicely – bathed by naked bulbs, the violinist and pianist, a wonderful set of performances by Alice Pinto and Phillip Granell, oscillated between being Pozdnyshev’s accompaniment and his tormentor. Having the pair physically, spectrally present added a weighted tangibility to the general feeling of paranoia. One strange dramatic incident was the relationship between violin and narration. As much of the music was a reaction to what was being said on stage, whenever Granell adjusted his position or brought the violin up to a chin rest position, we as an audience are almost forewarned of some major incident that’s about to arrive – why else would the musicians prepare to play? This was certainly by no means a fault, but simply an interesting phenomenon.

If you couldn’t tell from the tone of this review, The Kreutzer Sonata contains perhaps one of the best performances of the year, and for that alone is well worth watching. An exhausting, emotional experience that delves into forms of paranoia that can appear to even the most rational of human minds – pieces that can be this forensically involved in the human psyche are rarely found on stages like the Arcola, and for that should be cherished for their successes.

The Kreutzer Sonata is on until the 23rd July.