Sonia Friedman Productions is delighted to announce the West End transfer of Mark Rylance and Louis Jenkins’ critically-acclaimed new comic play Nice Fish. Direct from sold out seasons at the American Repertory Theater at Harvard University in Cambridge  and St Ann’s Warehouse in New York, Academy and Bafta Award-winner Mark Rylance (Bridge of Spies, The BFG, Jerusalem, Farinelli and the King) will return to the West End to perform in the production, directed by Claire van Kampen (Farinelli and the King).

The West End production will open in November 2016 for a strictly limited season at the Harold Pinter Theatre. Tickets go on sale to priority bookers today and the Box Office opens for general on-sale on Sunday 10 July at 10am.

In a unique collaboration with critically-acclaimed Minnesotan contemporary prose poet Louis Jenkins, Mark Rylance draws on his teenage years in the frozen winters and culture of the American Midwest. This beguiling new play follows an ice fishing expedition where the ordinary and extraordinary collide in a sublimely playful and profound way.

On a frozen Minnesota lake, the ice is beginning to creak and groan. It’s the end of the fishing season and on the frostbitten, unforgiving landscape, two old friends are out on the ice and they are angling for something big, something down there that is pure need, something that, had it the wherewithal, would swallow them whole.

Keen to hook a ticket?  Then come dressed as a fish or fisherman (with your fishing rod), and get yourself a complimentary ticket in a private box.  Available on a first come first served basis from 6pm on the night of the performance (1.30pm for matinees). One ticket available per person.  Don’t be shellfish, bring a friend!

The full New York cast will transfer to London for the limited season.  Ron (Mark Rylance) and Erik (Jim Lichtscheidl) play old friends whose ordinary lives are comically exposed during the trip. They are joined by Kayli Carter, Bob Davis and Raye Birk. 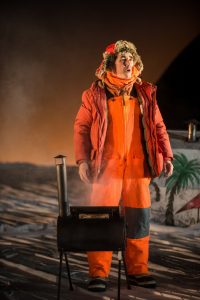 Louis Jenkins has 17 collections of poetry and has been published in a number of literary magazines and anthologies. His work has won him multiple awards, including two Bush Foundation Fellowships for poetry, a Loft-McKnight fellowship, and the George Morrison Award. In 2008 Louis started working with Mark Rylance on the stage production of Nice Fish, based on Louis’ poetry. Later this year he will be publishing a new collection of poems.

Claire van Kampen’s critically-acclaimed Farinelli and the King was a sell-out success in the West End in 2015 after transferring from Shakespeare’s Globe. Claire began her theatre career with the RSC and the National Theatre, becoming the first female musical director with either company. She was Associate Artistic Director at Shakespeare’s Globe as well as the founding Director of Theatre Music, and created music for more than 45 of the Globe’s productions.  Other theatre work incudes Twelfth Night and Richard III (Shakespeare’s Globe, West End Broadway) and original scores for Matthew Warchus’ productions of Boeing-Boeing (West End and Broadway) and La Bête(Broadway and West End). Claire’s television and film credits include Peter Kosminsky’s Wolf Hall, Roland Emmerich’s Anonymous and Christian Camargo’s Days and Nights.

The production has set by Todd Rosenthal, costumes by Ilona Somogyi, lighting by Japhy Weideman, sound by Scott W. Edwards and music by Clare van Kampen.

The American actors are appearing with the support of UK Equity, incorporating the Variety Artistes’ Federation, pursuant to an agreement with Actors’ Equity Association.