Brought to you by Les Enfants Terribles and ebp, the team behind the Olivier Award-nominated smash hit Alice’s Adventures Underground, in association with gastronomic wunderkindsBompas & Parr and creative wranglers Creature of London, Dinner at the Twits is a gloriously gruesome interactive theatrical dining experience that will blow your mind and tickle your tastebuds.

Based on the best-selling and much-loved title from the world’s number one storyteller. For the very first time join two of Roald Dahl’s most exquisitely appalling characters, Mr and Mrs Twit, inside their windowless house and ghastly garden for a grown-up journey down memory lane. But be warned: Dinner at the Twits is not for the faint of heart or soft of stomach!

Your evening will include a banquet of deliciously disgusting dishes, to be enjoyed with homemade cocktails, Mr Twit’s special brew and Mrs Twit’s potent punch.

Fish the glass eye from your cocktail, take a slice of bird pie, and enjoy all manner of fabulously foul food while being entertained by your horrid hosts.

Celebrating a hundred years of Roald Dahl, in a year filled with gloriumptious treats, Dinner at the Twits is designed specifically for grown-ups – no chiddlers allowed! Roald Dahl’s unique blend of macabre humour and quirky warmth has endeared him to generations of children and adults. Dinner at the Twits is the first adaptation of one of his children’s titles specifically created for adults.

Produced by Emma Brünjes, James Seager and Oliver Lansley with Creature of London, directed by Emma Earle, written by Oliver Lansley and Anthony Spargo, and designed by Sam Wyer, Dinner at the Twits will run at The Vaults in Waterloo from 4 September to 30 October. 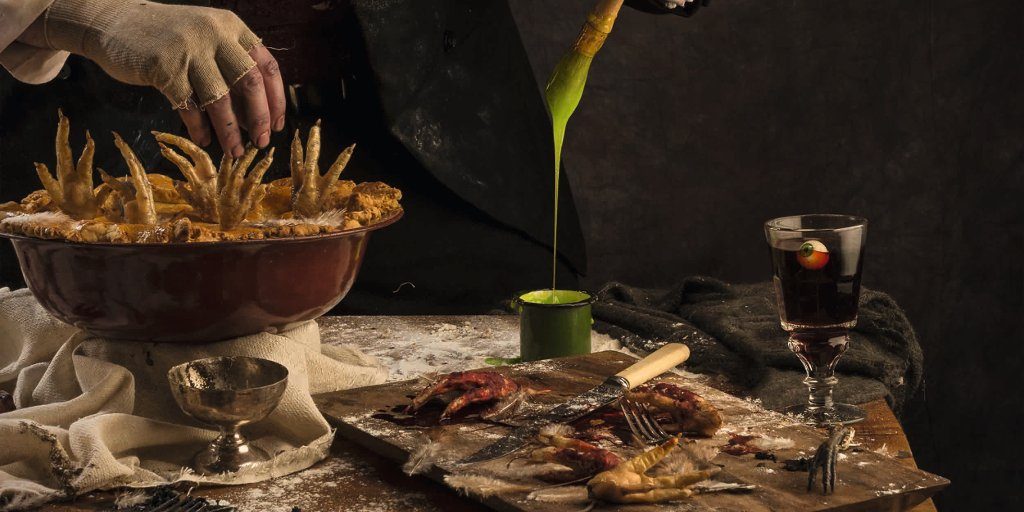 Oliver Lansley, of Les Enfants Terribles, said: “We are delighted to be presenting the first adaptation specifically created for adults of one of Roald Dahl’s hugely adored children’s books. We never really lose our sense of play, our relish in the bizarre and revolting. Dinner at the Twits will give adults the opportunity to explore those boundaries between disgust and delight, to come up close and personal with the hideous hairy Twits and to be taken on a multisensory journey through Dahl’s beguilingly bizarre world.”

Harry Parr, of Bompas & Parr, said: “We have always been fascinated by food taboos, and the gleefully grotesque universe of the Twits seems to us the perfect place to probe the limits of gastronomic experimentation. We want guests at Dinner at the Twits to be titillated, intrigued and surprised, and we promise that squeamishness will give way to scrumptiousness as you open your minds and your mouths…”

Les Enfants Terribles and ebp first joined forces in 2014 to create the technically and creatively ground-breaking theatrical experience, Alice’s Adventures Underground. An immersive and interactive theatrical production, it was the hit of the summer and ran at The Vaults for 21 weeks in 2015, playing to a total audience of 94,000 people and garnering a nomination for the Olivier Award for Best Entertainment and Family.

Emma Brünjes is an experienced producer, promoter and General Manager with ten years’ experience in theatre and comedy; as Head of Avalon Promotions, General Manager of Productions and Programming at Nimax Theatres and Producer of the Foster’s Edinburgh Comedy Awards among many other roles. In 2013 she started ebp, which has quickly established itself as a producer of great productions and great talent across its broad portfolio.

Creature of London is an independent creative company that produces film, theatre, music videos and advertising, from The Hairy Ape at Southwark Playhouse, to associate producing Alice’s Adventures Underground with LET and ebp, to the Green Party’s ‘The Not So Secret Life of 5-Year-Old Politicians’, a video that became one of the most shared party election broadcasts of all time.”