The company devise new work and interpret classics through a holistic process that integrates drama, live music, movement and design. Influenced by sitcom and sketch comedy, modern and classic film and music of all ages, DugOut make work that is playful, comedic and multi-
disciplinary.

Swansong follows three men in a pedalo who have survived a watery apocalypse, in order to examine how lies become stories and stories become legend. It performs at the Pleasance Courtyard from the 3rd – 29th August, with a break on the 16th.

Stack – a musical comedy – tells the tale of celebrity explorer Stackard Banks on a madcap Amazonian expedition that will change his life forever. It plays at Bedlam Theatre from the 3rd to the 28th of August, with a break on the 16th. 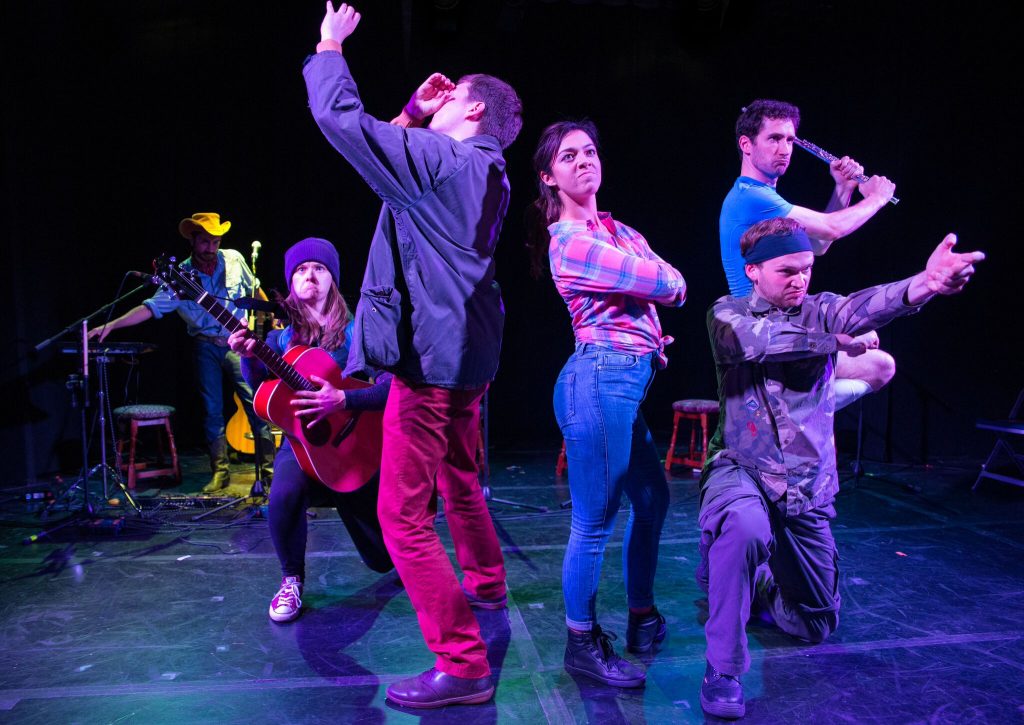 TB: How does your company create its original work?
DugOut: I think the original tone of DugOut’s work comes from the fact that, as a theatre company, we’re an unusual mix of actors, writers, musicians, comedy sketch performers and stand ups. It’s a bizarre alchemy that creates an unconventional tone. What we have in common is our sense of humour, love of live music and a desire to entertain people, above all.

TB: DugOut’s shows are distinctive for their use of music onstage – how does this affect/how did this become part of your performance practice? Why create multidisciplinary work?
DO: With so much competition from other forms of media, I think that theatre should do its best to promote its unique selling points. In particular, it should embrace the fact that it is a live event. For us, creating the scores and sounds of our plays live feels more exciting and truer to the form that we are so passionate about.

TB: What are you looking forward to most about the Edinburgh Fringe?
DO: I’m very excited (and terrified in equal measure) about having three DugOut shows up at the fringe this year. It could be a big year for us, but it could, also, go disastrously wrong. That’s what’s great about the Fringe – there’s no guarantee of an audience and word of mouth is king. We will just have to see. Eeeek.


TB: Why should Fringe audiences come and see your show?
DO: The play has a great blend of live music and comedy. People come to the fringe to laugh, to cry and to tap their feet. Hopefully, in one DugOut hour, you can do all three.