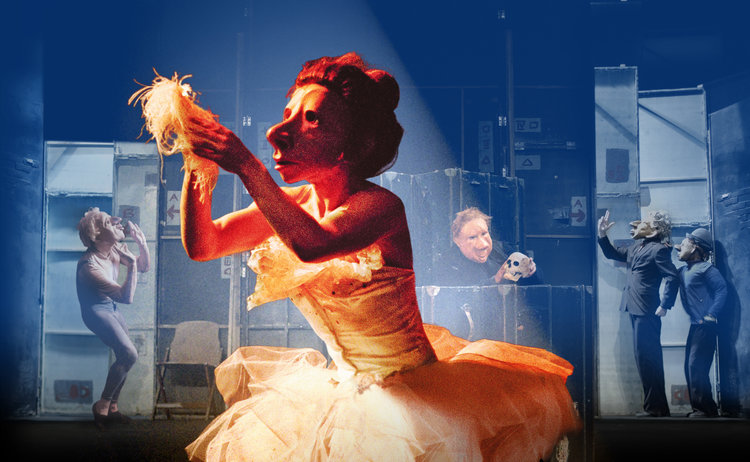 Theatre Bubble: Where does the name Familie Flöz come from?
Hajo Schüler: A “Flöz” is a layer in the earth which contains any kind of valuable materials, originally deriving from mining industry. Our first play told the story about a family living underground, discovering and expanding over-ground

TB: You are reviving Teatro Delusio 12 years after its premiere production. What makes it the right time to come back to this work?
HS: Teatro Delusio is a tale and an homage to the world of theatre. In our eyes it did not loose its vital energy over the years. Another initial idea was to create the illusion of a huge cast, a wide range of characters, with just three actors. When we found three talented young performers, we decided to restage it.

TB: What was the inspiration behind this piece?
HS: The German words “Schein” and “Sein” describe the inspiration in such a beautiful way. The stars who play in the light, the stage workers that are so close, but in the dark. The word “illusion” derives from the latin word for play: ludere. Without illusion, no play. In a certain sense we wanted to celebrate the act of playing itself.

TB: What inspired you to use masks in your work?
HS: One aspect surely was the possibility to jump into so many different characters within seconds, keeping a strong visual image. The mask is the most powerful tool that was invented to do theatre. It is the symbol of theatre. For a play that deals with theatre itself it might make sense to use a mask.

TB: What are you looking forward to most about the Edinburgh Fringe?
HS: The fringe can make the show stronger. To perform nearly a month in such extraordinary circumstances like as part of the biggest art event worldwide, it is a huge challenge for the play, the performer. We are looking forward to that challenge!