In their UK debut, presented with Underbelly Productions, Chicago-based Manual Cinema uses overhead projectors, actors, live music and hundreds of shadow puppets to tell a story of the fantastic and supernatural, exploring mourning, melancholy and self. Ada/Ava was recently nominated for a Drama Desk Award for Unique Theatrical Experience.

Ada/Ava performs at Underbelly Potterow from the 3rd – 29th August, with a break on the 16th. 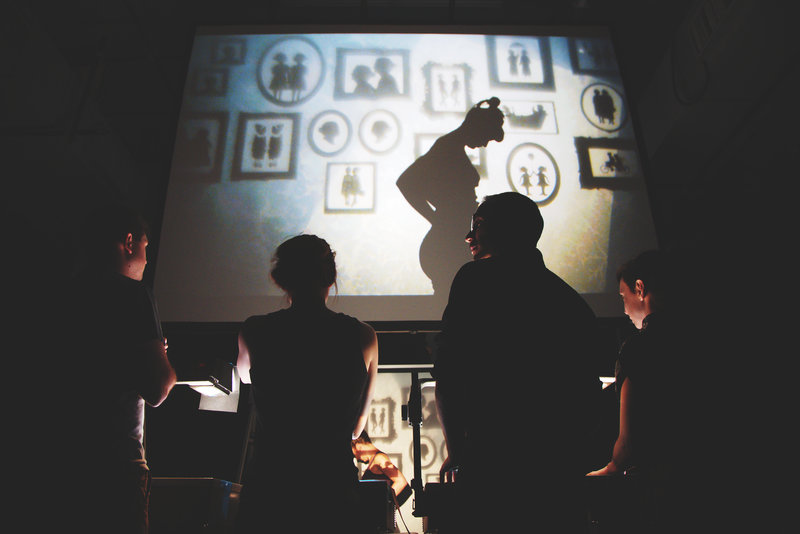 Theatre Bubble: This is the company’s UK debut. What made this the right time, or the right show, to bring Manual Cinema’s work to the UK?
Manual Cinema: We have been developing and touring this particular show, Ada/Ava, for a few years now; it began as a little ten-minute puppet show that we performed in the window of my first-floor apartment on Halloween a few years ago. Since then, it’s grown up quite a bit. The most unexpected place we ever performed it was in Tehran for an Iranian puppetry festival. But even as we were touring it we were adding new material to the show, and it’s finally in a place where it feels done ready for Edinburgh!

TB: How does your company create its original work?
MC: We use about four hundred paper shadow puppets over the course of the performance, all of which are manipulated on four old-school overhead projectors to create what appears to be a handmade animated movie. All of our music is live, as well, and performed by a three-piece ensemble of cello, guitar, piano, and vocals.

Making a Manual Cinema show is sort of a hybrid between making a theatrical production and an animated film. We begin by storyboarding the script like a movie, and we even film a “first cut” version of the piece to be scored and sound designed. But the last month of the production process is always about bringing the puppeteers and musicians together to make it a work of live theatre.

TB: What led you to your unusual performance practice?
MC: We’re not the first puppeteers to use overhead projectors for shadow puppetry, but we’re the only company we know of who works with them exclusively. We began when one of our members, Julia Miller, discovered an overhead projector in her apartment garage; she’d worked on shadow pieces before for other companies and brought a few of us together to make a short piece. It was always meant to be a fun side project, nothing more, but after that first show people kept asking us to make another one, and six years later, here we are.

TB: What are you looking forward to most about the Edinburgh Fringe?
MC: Bringing a show to the Fringe has been a longstanding dream of ours! We’re just so excited to see so much work from the UK and all over the world — we’re expecting to come away feeling creatively energized.

TB: Why should Fringe audiences come and see your show?
MC: Most people who see a show by Manual Cinema have described it as unlike anything they’ve ever seen. It’s a lot like going to the cinema — even the music and sound are delivered to you in quadraphonic surround sound, so it sounds closer to a movie than a play — but at the same time, it delivers all the liveness and spontaneity of theater.