It’s the time of year for Theatre Bubble to begin publicity for the Edinburgh Fringe – the largest arts festival in the world.

Rockie Stone (Circa, Circus Oz) and Vincent van Berkel (Knee Deep, Circus Oz) explore the stark reality of climate change in an eco-apocalyptic circus show, receiving its European premiere at the Edinburgh Fringe. Perhaps Hope performs at the Underbelly’s Circus Hub from the 4th – 22nd August, with a break on the 15th. 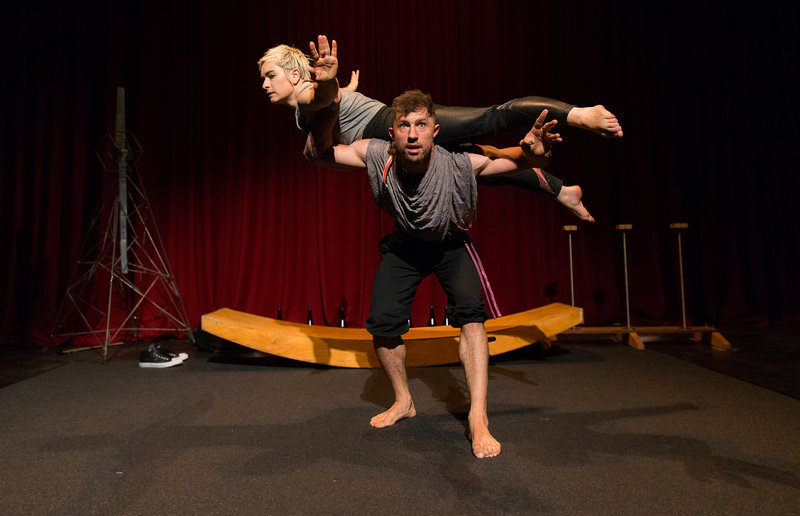 Theatre Bubble: What is an eco-apocalyptic circus show?
Perhaps Hope: We are in an era on this planet where things are progressing exponentially: population growth, technology, capitalist consumption, and climate change. This pivotal moment is both exciting and terrifying, as there are two paths ahead: one is in the direction of conservation and renewable energy, the other direction is one of irreparable consumption bringing quite literal death and destruction. The stakes are immeasurably high.

Our eco-apocalyptic circus show uses this gigantic idea as the starting point to create an intimate work of tension, humour and grit, the personal experience of the current planetary crossroads. We used circus and acrobatics as the physical language for this show, because it’s what we as acrobats know best.

TB: Your show draws inspiration from chaos theory, biomimicry and social commentary. What is the interplay between this cerebral material and your circus practice, which many would see as a non-intellectual form?
PH: The cerebral nature of the subject matter was always going to be interesting to work with as a starting point. How does one create a circus show about climate change? Is it possible to marry the two, to create meaning from potentially meaningless movement? A particular movement can mean many different things in different situations. In my mind this is a very exciting aspect of contemporary circus at the moment, and something that interests Rockie and I greatly.

Chaos theory appears in our props and show structure: the idea of repetition, and that nothing repeated is ever quite the same. Biomimicry was the original seed for the show before the idea of climate change became the dominant one. The current political and socio-economic climate is so pervasive, it permeates everyone and everything whether we know it or not.

Instead of preaching or making these elements overbearing, we have used acrobatic movement and language as texture and symbolism. We also steer away from creating literal interpretations. We made something interpretable and personal. It’s our experience and thoughts onstage, and almost through a dream-state we explored what it might mean to watch two acrobats on a precipice.

TB: What do you hope to inspire in your audience?
PH: As an acrobat, I hope people to enjoy the acrobatics! I also hope the show inspires discussion, debate and thoughts of the future and of the planet we live on.

TB: Why should Fringe audiences come and see your show?
PH: There is quite literally, nothing else like it. There are props of our own invention which have never been seen before, and a completely unique interpretation on the universal topic of climate change. It’s abstract climate-change acrobatics, framed with beautiful imagery and incredible skills!