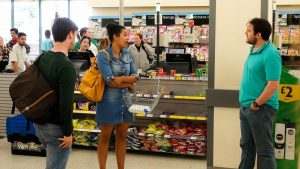 This pop-up opera, staged as part of Grimeborn Festival at the Arcola Theatre, began almost imperceptibly; two performers sat down on a local restaurant bench in Dalston Square and – accompanied by violin and guitar – began singing about meeting after a long absence. As the audience follows Drifting Dragons across Dalston Square, it is revealed that the friends Sadie and Jason have not seen each other in months and both have exciting – or terrifying – news to share with each other. Compounding the matter is Sadie’s boyfriend Dan, who accidentally discloses and uncovers secrets that threaten their circle of relationships.

The music, while unconventionally bare and folk-like for opera, is beautiful – tonal and melodious. The performers sing without amplification, but the audience is never kept at a distance and the voices are uniformly strong. Felicity Buckland plays Sadiw with a combination of stoicism and vulnerability. Louis Hurst brings a jovial obliviousness to Jason, exhibiting his character’s development and awareness as the plot unfolds. Lastly, Nicholas Morton makes Dan – caught between choices – sympathetic and humanly imperfect.

With opera – a famously loquacious and long-winded art form – it is hard to develop a story with an introduction, conflict, climax, and resolution in only fifty minutes. However, Greg Haradine manages to create three characters, each with their own dreams and obstacles, and give the audience insight into their motivations and actions. Yes, the resolution feels very fast for the everyday yet life-and-death situations presented, but it neatly resolves the conflict with nods to earlier motifs. It is an engaging, moving, and relatable work which fits its intimate yet commonplace setting perfectly.

The show’s main weakness is perhaps the inclusion of the ‘dragon’ nicknames that Sadie and Jason called each other in childhood and reference in adulthood. Without the luxury of a longer narrative, this device seems forced and out of place. Due to the good storytelling and plaintive music, the plot and the emotional connection to the characters – and between Sadie and Jason – would not be hurt by an omission or replacement of this ill-fitting metaphor. All we need to know is that these two friends have grown apart and missed valuable pieces of each others’ lives – a fact established in the first minute without nicknames. The rest falls neatly into place.

While Drifting Dragons may not be flawless, it is nonetheless a beautiful ode to friendship between changing lives. With a relatable storyline and excellent performances, it is an ideal public opera.

Drifting Dragons has played from the 26th– 31st of July at various outdoor places across London including Merton, Raynes Park, Mitcham, Morden, and Wimbledon, where its final performances will be on the 31st. Its performance at the Arcola Theatre is part of the Grimeborn Opera Festival. All performances are free to the public. For more information visit http://www.baselessfabric.co.uk/upcoming-productions/drifting-dragons/ and http://www.arcolatheatre.com/event/grimeborn-drifting-dragons/2016-07-30/.