A few weeks ago Theatre Bubble reported on the Donmar Warehouse’s new programme, which is coming to the King’s Cross Theatre in September. Continuing these exciting developments in London’s theatre scene is a hotly anticipated musical – kept tightly under wraps until this week – which will also be performed at the King’s Cross Theatre in its own purpose-built, 900+ seat theatre space. Waiting for Hamilton may become more bearable knowing that we will have Lazarus – David Bowie’s first musical and final project – opening on 25th October.  Tickets have gone on sale today at 10am. 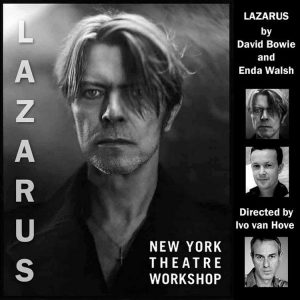 Lazarus played for sold-out audiences in at the New York Theatre Workshop from 15th November 2015 to 20th January 2016, days after the pop legend’s death from cancer. Its full London production will open at the King’s Cross Theatre for (at least) a slightly longer run – bookings (via the  are currently being taken until 22nd January 2017, and tickets bands are priced between £15-£95.

The musical, which shares a name with a track on Bowie’s final album Blackstar, is based on Bowie’s character Thomas Newton in the book and film The Man Who Fell to Earth. As expected, it takes the form of a jukebox musical, and the soundtrack features some of his most famous songs off albums from Hunky Dory to Blackstar. However, there are also three original songs in the show that have been written specifically for the production, giving even the most knowledgeable and passionate fan new material.

The critical reviews have been very positive during its New York run; the show was touted as ‘theatre at its finest’ by Rolling Stone and awarded four stars by The Guardian. Bowie himself, who died on January 10th this year, once stated in an interview that he had wanted to write a West End musical since he was a teenager. While he is no longer here to see this production come to fruition, this production of Lazarus in London brings his desire to life and his art to a legion of devoted fans.

Lazarus is written by David Bowie and Enda Walsh, directed by Ivo Van Hove, designed by Jan Versweyveld, and based on Walter Tevis’s novel The Man Who Fell to Earth. One hopes that overall, in Bowie’s home city, the run will be longer and the tickets more plentiful. It seems that many will want to experience one last new work from Ziggy Stardust and the Thin White Duke.

Between the previously announced Donmar season and the UK premiere of Lazarus, the King’s Cross Theatre is proving to be one of the most exciting venues in London this autumn. It seems that Bowie and Shakespeare will more than fill the void until Hamilton arrives next year.

Find out more at lazarusmusical.com