A brutal, touching thriller full of nightmarish insights into the dangers of being a refugee.

Imagine your world tore itself apart. Everything that kept you safe, everything you counted on for your future, all crumbled away before your eyes. What would you do? Where would you go? What would you become? And how far would you be willing to go to survive? Far from being distant, hypothetical questions, these are dilemmas which men, women and children in many different parts of the world face every day – and which Metal Rabbit‘s excoriating new play at the Arcola Theatre, Cargo, seeks to open our eyes to, no matter how painful that may be. 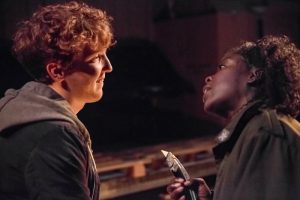 Confined to a tiny shipping container aboard a smuggling boat on the English Channel, the setting and aesthetic of the play acts as a perfect symbol for its themes: caged like animals, audience and characters alike are trapped in pitch darkness which is only made more dangerous by turning on the light. Visualised in the stark, echoing set (designed by Max Dorey), placing the action in a cavernous yet claustrophobic box in the open sea brings home the dual terrors of being cast into the wide, hostile world and of being forced to face decisions nobody should ever have to make.

The gripping vision of the directorial team, David Mercatali and assistant Max Lindsay, is also reflected in the cast’s portrayal of their characters. The hard-nosed Joey’s (Milly Thomas) desperation to take care of her wide-eyed younger brother Iz (Jack Gouldbourne, making his promising professional début in this piece) is revealed with growing, and poignant, vulnerability as events unfold, providing a heartbreaking point of reference for the audience. Gouldbourne puts over Iz’s naïveté and child-like urge to see those around him happy very well, and succeeds in being likeable rather than irritating. He opts to under- rather than overplay Iz’s apparent developmental disorder, which is an encouraging change from the stereotypical and exaggerated portrayals one too frequently sees in theatre, although it does make it a little difficult to determine how old the character is and the degree to which his understanding is impaired.

For me, however, the stand-out performance was Debbie Korley as Sarah, a troubled, cynical fellow-traveller. The character’s pain and inner strength are both reflected beautifully in her delivery but also in body language, from her resolute yet lopsided stance to the subtle changes in the way she watches the others in an atmosphere of ever-shifting mistrust. Meanwhile, Reduced Shakespeare Company alumnus John Schwab brings refreshing contrast in the character of Kayffe, with a lightness and charisma that helps to texture the mood beyond unremitting paranoia and despair, although there are a few occasions when he comes over as a little too relaxed, interfering with the tension and sense of threat.

Like the austere set, the soundtrack, designed by Max Pappenheim, is stark but rich, with mechanical groans and shrieks combining with an eerie musicality at all the right moments in the play. The dialogue is economic yet evocative, telling us all we need to know about the catastrophes that led to the play’s events without conspicuously expositing. The exception to this is the tendency for characters to reminisce for just a little too long when prompted, each one at some point wistfully describing their past in a way that sounds similar regardless of who is speaking. This is unfortunate, as the dialogue is normally nicely distinct from character to character, and protracted speeches that sound ‘written’ in this way undermine the individuality of these voices.

It’s hard to think of a play more timely and impassioned than Cargo, which is clearly analogous to the Syrian refugee crisis, and has official partners in the form of four major refugee charities: the Refugee Support Network, Calais Action (of which Berry-Hart is a key co-ordinator), Help Refugees and the Migrant Rights Network. By relocating the collapse of society to a fictionalised UK, this production tears away the sense of ‘otherness’ we use to avoid empathising with refugees, and forces the audience to confront the horrifying scenarios that the media negligently present as mere excuses to immigrate. If this is what is needed to shock us into treating them with a little more compassion and a little less resentment, then it hasn’t come a moment too soon.

Cargo continues its run at the Arcola until the 6th August at 8pm every day except Sundays, with a matinee at 3.30pm on Saturdays. The play is 80 minutes long with no interval. Tickets can be booked here.