Review of: A Midsummer Night's Dream at Brasenose College, Oxford

Full of successful moments but lacking a sustained vision.

It begins with music. Drift into Brasenose College’s gothic-revival New Quad at seven o’clock any night this week, and you will be greeted by a band of “rude mechanicals” playing covers of British pop songs and winking at the audience. Director Will Felton has brought a corner of industrial Bradford into the middle of an Oxford college. The music is brash and bawdy, and after half an hour of it the play begins with a vignette: two fairies freezing the uptight Athenians and arranging them into lewd poses. Several of the musicians peel off to become part of the cast, and in this way the band is, happily, made part of the world of the play. 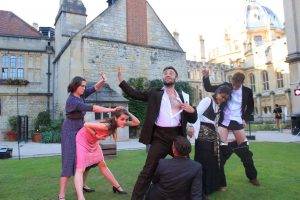 In spite of the industrial northern-England setting, this is a fairly ‘straight’ production of the Shakespearean original. There are hints of darkness, not pursued far, in some of the fairy scenes; hints at class conflict among the lovers are likewise dropped but not developed. When Puck leads the Athenians onstage at the end, they come on yapping like hunting dogs and wearing dogs’ ears and collars—but production goes no further in sending up the animal goings-on that happen when the decorous city-dwellers step into the wild forest, and the moment ends up feeling out of place. The production felt, in this respect, a little aimless: full of beguiling ideas but lacking the will to pursue them very far.

But it was still stuffed full of successful moments. The physical sequences among the mechanicals were intricate, tightly choreographed, and belly-laugh funny; the music, led by Callum Akass and operating as a genuine ensemble, provided a tonic atmosphere. In the cast, the standout performances were among the smaller roles. James Mooney brought a Quince who was a pitch-perfect blend of nervous and pedantic. And Alex Wickens was the hero of the night, responsible not just for several crisp and funny lines as Starveling, but also for designing the superb costumes.

This production spends a week in Oxford before going on to London, Stratford-upon-Avon, and Japan: with its trimmed cast and lean set (just a few crates), it’s made for traveling. It’s also made for a studio theatre space, though, and in the wide, echoey quad, some energy was lost. I saw what was effectively the first night of the previews, so it would be unfair to dwell on faults within the cast that will be smoothed over in the coming days and weeks. But the cast members did have a troubling habit of seizing hold of their speeches and refusing to let go, making heavy pudding out of what should have been a light summer dish. The play calls for more of an ensemble spirit; hopefully the actors will become more generous as the run goes on.

The writer apologises for the fact that this review originally misrepresented the band as all-male; in fact, Madeleine Walker (Philostrate) was one of its members.

A Midsummer Night’s Dream is at Brasenose College, Oxford, until July 22, and afterward at the Tristan Bates Theatre, London (July 25–30), in Tokyo and Kyoto, at Hatfield House (August 18), at The Dell, Stratford-upon-Avon (August 20), and at the Mill Studio, Guildford (August 24–27).