A dazzling and dizzying experiment in visual, aural and ideological complexity, 'YOUARENOWHERE' at Shoreditch Town Hall is truly a must-see show for LIFT 2016.

Advertised as one of the ‘must-see hot tickets’ of LIFT 2016, YOUARENOWHERE at Shoreditch Town Hall has already received critical recognition around the world. This American addition to London’s festival of global art first toured in Australia and France, before stunning audiences during New York’s 2016 spring theatre season. Andrew Schneider’s brilliantly tumultuous blend of technological innovation and fervid performance not only lives up to this praise — it transcends expectation. 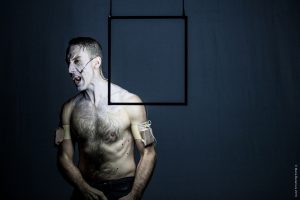 To try and discuss the plot would be a somewhat foolhardy endeavour; though there is a narrative that creeps upon its audience with startling momentum, the play is more of a conglomeration of variant ideas. In one moment, performer Andrew Schneider discusses quantum mechanics. Before we can take a breath, he has moved onto the nature of love. Only once we find our footing again does he suddenly become engrossed in the fabric of reality, then multiple realities, AA twelve-step programmes — all in one storm of consciousness amalgamation of philosophical and scientific concepts. Despite the rapidity of such jarring monologues, Schneider’s vocal dexterity is so precise that every word is understood. Whether they can be effectively processed in time is a different matter, but this does not impede the performance in any way. On the contrary, our inability to fully comprehend the myriad of intricate theories only adds to the enveloping confusion that YOUARENOWHERE revels in; we are merely bewildered bystanders in Schneider’s intellectual playground.

However, to limit discussion to Schneider’s vocal performance would be to do him a disservice; his physicality was perhaps his greatest strength. Throwing himself about the stage in magnificently excruciating paroxysms, his energy appears limitless. Though that is not to say his movements seemed effortless — every contortion of his body echoes the true magnitude of his turmoil, despite attempts to conceal such pain from prying eyes. When a moment of sudden stillness finally emerges from these crescendos of hyperactivity, the two states of being serve to contrast each other beautifully. This is a man obsessed with questioning the multiplicity of life, because he cannot face the raging dichotomies within himself. 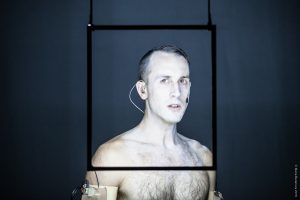 The technological aspects of the play possess a life of their own, and in their entirety create a tempestuous character that toys mercilessly with Schneider’s perplexed protagonist. With a background in constructing interactive electronic art works and installations, it is evident from the first blinding flash of light that Schneider is in his element. There is no time for soft fades or dim hues of coloured light in YOUARENOWHERE (except perhaps in one instance, however, that is far too pivotal a scene to spoil here). Every note of emotional and physical distress is accented by instant fluctuations of brilliant white light, multi-coloured flashes or harsh chiaroscuro. The result is dizzying to the point of becoming almost too unbearable for the eye to behold, but we must endure; to look away for an instant would be even more unbearable.

Andrew Schneider’s YOUARENOWHERE at Shoreditch Town Hall is an experiment in visual, aural and ideological complexity. A multitude of concepts merge seamlessly into each other, and collectively paint an unrestrained depiction of individual perspective and our variant notions of reality. The point of the piece seems to raise discomforting questions without resolution, to repeatedly probe the anxieties of existence at break-neck speed and deny any sense of a desired conclusion — and the effect is breath-taking. Among the many excellent plays offered by this year’s LIFT Festival, YOUARENOWHERE should be your priority.

YOUARENOWHERE will be continuing its run at Shoreditch Town Hall until June 18th, with performances everyday at 7.30pm, and a 2.30pm matinee on Saturday 18th. The show has now sold out, but email  youarenowherelondon@gmail.com to find out how you can take part.