Review of: Titanic at the Charing Cross Theatre

There’s a lot to enjoy about Titanic - it’s a musical filled with a number of innovative harmonic numbers, interlacing class commentary with comedic interludes

Given its rousing score and pertinent subject matter grounded in historical realism and social commentary, it is unsurprising that Titanic won the Tony Award for Best Musical in 1997. Since then it has gone on to receive a number of revivals across the world, finally coming to the West End’s Charing Cross Theatre after a well-received run at the Southwark Playhouse a few years ago. The Charing Cross, an unusually narrow auditorium that elongates and tapers off at the back, feels ready built – already slightly resembling the titular vessel in shape (though perhaps not in size). It’s the perfect space therefore to see Titanic return, with a punchily pertinent show that stands as a marvellous 150 minutes.

There’s a lot to enjoy about Titanic – it’s a musical filled with a number of innovative harmonic numbers, interlacing class commentary with comedic interludes and well-performed romantic entanglements. As has been noted by philosophers and film critics, the Titanic is both a historical and symbolic vessel, a microcosm of class tension that Peter Stone, overseeing Story and Book, does not shirk from indulging in. If we are to interpret the Titanic story through this lens, it becomes the tale of a doomed nation obsessed with economic and social divides. Barrett’s Song, coming early in Act One (and performed with magnificent power by Niall Sheehy, perhaps one of the most captivating talents of the show, if not the West End), for example, suggests that those working in the engine room had a grave foreknowledge of the events to come – had they been listened to then the whole collision could have been avoided. 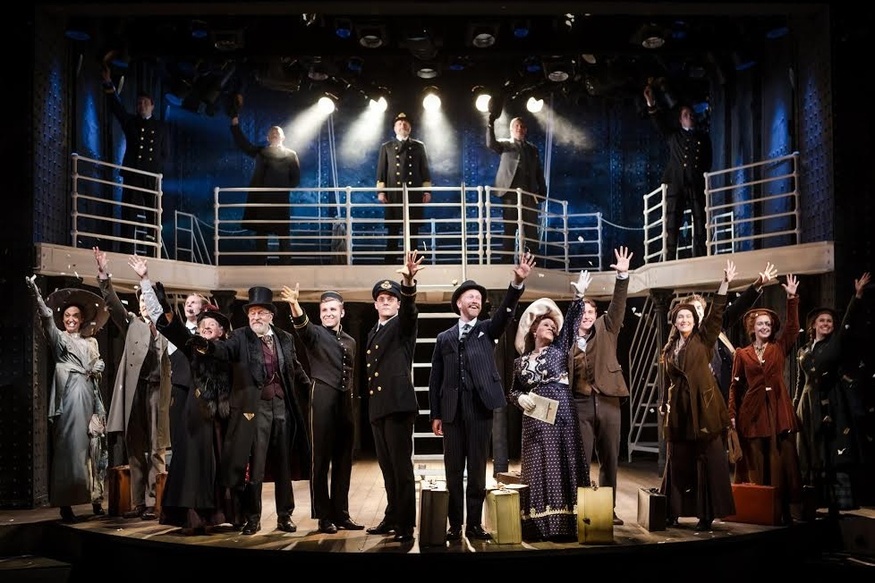 This is a trans-Atlantic society obsessed with respectability and position, even when the inevitable crisis collides with the narrative. The iceberg crash was a harrowing episode, men dying both with climactic ferocity and quiet dignity. Maury Yeston brings a variety in tone to his score, never relying too heavily on a single motif or retreading old boards with newly revealed sentiment. Cressida Carré’s choreography saw some brilliant individual moments (that felt sometimes slightly restricted by the narrow stage space), particularly the Ragtime sequence and its jovial free-spiritedness. The cast were stellar throughout, clambering across an excellent design from David Woodhead in a whirlwind of exuberance.

As with a number of historical shows, Titanic is an exercise in teleological presupposition – we know what’s going to occur before it does. In some instances this adds extra degrees of suspense and pertinence, but with some of the points it felt as though the retrospective nature of the show was slightly overwrought – there was a slightly too hamfisted attempt to make us understand why the boat sank, at the expense of some of the more emotional beats during the show.

A note must, at this final juncture, be made about the ethnic diversity of the cast, or lack thereof. My mind leapt somewhat to the idea of whitewashing, but a little digging revealed that, in fact, there was only one person of colour on the Titanic, so perhaps the show was conforming to historical accuracy rather than diversity. However, as a small, slightly well known historical musical on Broadway is showing, ethnicity does not skew historical and social truths, instead often amplifying them.