Review of: The Threepenny Opera

Raucous, filthy, and tongue-in-cheek, the National's new production of this classic features an all-star cast and lots of laughs 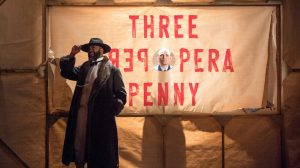 The tale of Mack the Knife and the seedy underbelly of London has had quite a history of adaptation. John Gay wrote perhaps the original version of it in 1728, entitled The Beggar’s Opera. Elisabeth Hauptmann translated his text into German, which Bertolt Brecht used to create his lyrics for a ‘play with music’. When Kurt Weill supplied the music, The Threepenny Opera was born in 1928. This seminal twentieth-century version has since been translated into eighteen languages and played around the world. London’s most recent production at the National Theatre, translated by Simon Stephens and directed by Rufus Norris, is a filthy, snarky, and largely traditionalist performance featuring strong performances throughout the cast.

The story is not hard to follow. Macheath, or ‘Mack the Knife’ seduces and marries Polly Peachum, the daughter of a petty crime lord who controls the beggars of London. Despite the efforts of Tiger Brown, Macheath’s old wartime buddy and now the chief of police, Mr Peachum uses the women Macheath has fooled around with (including Brown’s daughter, a scandal!) to ensnare him and send him to the gallows. But what type of ending would morality be for an opera, when you could have a happy song instead? A messenger from the King arrives to set Macheath free and everyone lives happily ever after.

The cast are uniformly excellent, keeping up with Weill’s difficult score while bringing lively characterisation to their ridiculous characters. Stage and screen veteran Rory Kinnear, while not known for his singing, holds his own vocally while making Mack the Knife a knavish, amoral, sexual predator with enough charm to endear himself to the audiences (and his lady love). As Polly Peachum, Rosalie Craig keeps her character’s naïveté and worldliness in equal, vivaciousness balance.   According to the show’s webpage the play contains ‘filthy language and immoral behaviour’ and it delivers in spades. Tongue-in-cheek jokes abound, including a newspaper with the sole headline ‘Mack Does Bad Things’ and a post-wedding night lovers literally descending from the moon; these elicit laughter by driving home the absurdity of every situation.

The impressive set consists largely of plywood frames connected by tearaway paper, through which characters often make entrances and exits; pieces are used over and over again for different purposes (for instance, the large set of stairs form a gaol, a jury’s galley, and then the steps to the gallows). The clutter and decrepit nature of the staging suggests the gritty, run-down turn-of-the-century streets in London’s East, and when it rotates on the Olivier’s stage it gives the illusion that the viewers are running through the backstreets with the criminals and whores. While the modern staging and technology were utilised fully, the feel was old-fashioned and traditional in the best way – supporting the outrageous characters in their own habitat instead of trying to update them or make them ‘more relevant’.

Perhaps the one thing that held this performance back was its pacing, especially during songs. It’s hard to cut a classic piece, but two hours and forty minutes feels very long for an irreverent comedy – even if it is an opera. The pacing at the beginning dragged, but once into the second act the hijinks unfolded at a more engaging rate. Additionally, while the rotating stage added dynamism and the between-song scenes were feisty, much of the singing was a bit ‘stand-and-deliver’ as in old-school opera. While not a fatal flaw, killing the momentum did the humour no favours.

On the whole, this raucous, ridiculous play is getting an excellent new production, and if you’re heading to the National this summer it comes highly recommended.

The Threepenny Opera is playing at the National’s Olivier Theatre on select dates until 1st October 2016, but currently only show up to 13th September are on sale to the public as opposed to members only. Performances are at 7.30pm in the evenings at 2pm for matinees. Tickets are £15-50 and can be booked from https://www.nationaltheatre.org.uk/shows/threepenny-opera/whats-on

By Bertolt Brecht and Kurt Weill, in collaboration with Elisabeth Hauptmann and in a new adaptation by Simon Stephens