Review of: The Quiet House at the Park Theatre

The Quiet House is a show shedding light on a modern yet emotional set of circumstances.

The Quiet House is a piece of theatre grounded in an incredibly modern emotional context – dealing, as writer Gareth Farr did, with the stresses, hopes and turmoil of protracted IVF treatment. This is a show that does not shirk from reality, embracing the full consequences of IVF and the ripples it has both socially, romantically and professionally.

Designer Ana Ines Jabares-Pita has turned the Park Theatre 200 into an urban apartment full to the brim with nostalgic functionality (somewhat reminiscent of the superb set from the latest incarnation of Skylight), iPod speakers ready to dial up the nostalgia and egg timers perfectly equipped to measure the agonising two minute wait for a pregnancy test to reach a verdict. The gritty realism of the performance is ideal – confronting a commonplace experience and giving it a platform. The subtle changes in lighting – particularly the LED tubes – was an innovative contraption that gave the stage an unexpected versatility, especially when the male protagonist, Dylan, shifted from office to living room. 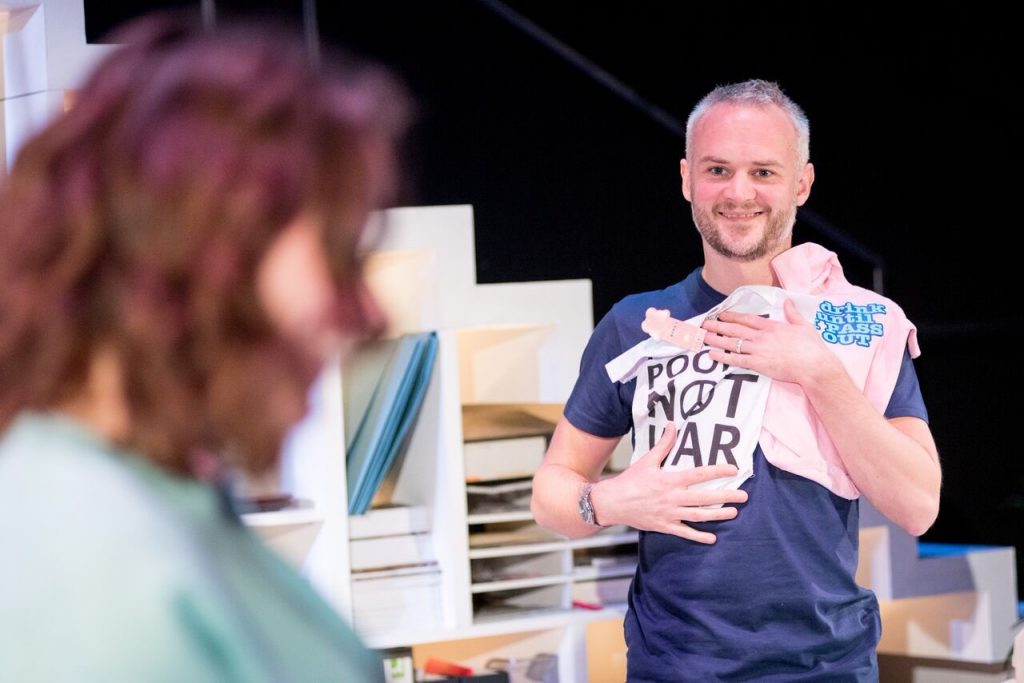 Farr’s story is a personal one, laced with humour and a refreshingly frank tone. This is not a show swaddled in artistry, but one that (save a few missteps, but to go into detail on their part would be to ruin the show’s conclusion) really lets its performers shine – in an exhaustive yet compelling two hander from Oliver Lansley and Michelle Bonnard. Their performers reminiscent of Duncan MacMillan’s Lungs, they bounced concept and emotion off each other with a comfortable ease, almost driving one another apart in the process. It may have been nice to have seen slightly more of Bonnard’s Jess outside of the context of maternal desire (making perhaps more than simply a passing reference to her professional life), her character arc defined entirely by her need to be a mother.

The performance was an outcry against social perception of childless families, loosely tying Dylan to his professional life, while creating tension between Jess and the new mother living upstairs (with beats slightly similar to The Ones Below at times). The show certainly has its moments of emotional heartbreak, particularly during one Tom Odell accompanied sequence, and director Tessa Walker has run with Farr’s script in keeping the performances grounded and natural throughout. Perhaps a shorter runtime could have been beneficial, but the show constantly felt like it was only ever skimming the surface of what was a hugely difficult time for the couple – we as an audience never got to witness the weeks of silence, of waiting, of hope and anxiety.