The Mousetrap originally opened at Nottingham Theatre Royal in 1952 starring Richard Attenborough and his wife Sheila Sim before embarking on its current record-breaking West End run. The production has been the world’s longest running stage production at its London home since breaking the record in 1958 and recently celebrated its 26,000th performance. The 60th Anniversary – and first ever – UK tour of this beloved murder mystery has now played over 1,100 performances up and down the country and been seen by over 1 million people, having broken box office records in many of its tour venues.

Anna Andresen trained at The Royal Scottish Academy of Music and Drama, her previous theatre credits include The Frozen Scream (Birmingham Hippodrome/Wales Millennium Centre), The 39 Steps (Criterion Theatre)  Above & Beyond, You Once Said Yes (LLLR) Into The Sunlit Uplands (Theatre 80.St Marks, NYC)  Texting From Dachau (Red Bean Studio, NYC) Running On Empty, Lisa Is Looking Into The Mirror (Bennett Media Studio, NYC) , Red Admiral (Soho Studio) The Bald Prima Donna (The Etc) and Crossed Wires(Theatre 503). In addition to her work on stage Anna has also appeared inFortitude, Miss Marple, Silent Witness and Wire in the Blood.

Nick Barclay trained at Mountview Theatre School and has appeared in more than 240 professional stage productions. Nick’s previous theatre credits include Stone Cold Murder, Dial M for Murder, The 39 Steps, The Titfield Thunderbolt, Strangers on a Train, Dead Funny, Romantic Comedy, Dangerous Corner, House Guest and Kind Hearts and Coronets. He is also a veteran of numerous repertory seasons in places such as Wolverhampton, Bournemouth, Crewe and Sidmouth. He has also written and performed for the world famous NewsRevue in London and directed various productions up and down the country. Nick has toured internationally with productions such as Stones in His Pockets, Art, Private Lives and The Complete Works of William Shakespeare (Abridged).

Tony Boncza originally trained as a journalist before joining The National Youth Theatre and then the Central School of Speech and Drama. Tony’s recent stage appearances have included roles in Great Britain (National Theatre), the South East Asian tour of The Mousetrap, Yes Prime Minister(West End & UK Tour), The Critic and The Real Inspector Hound (both Chichester Festival Theatre). Tony also played Sgt Trotter in the West End’s production of The Mousetrap 25 years ago. In addition to his work on stage, Tony has appeared on screen in The Royals, The Sarah Jane Adventures andEastEnders. 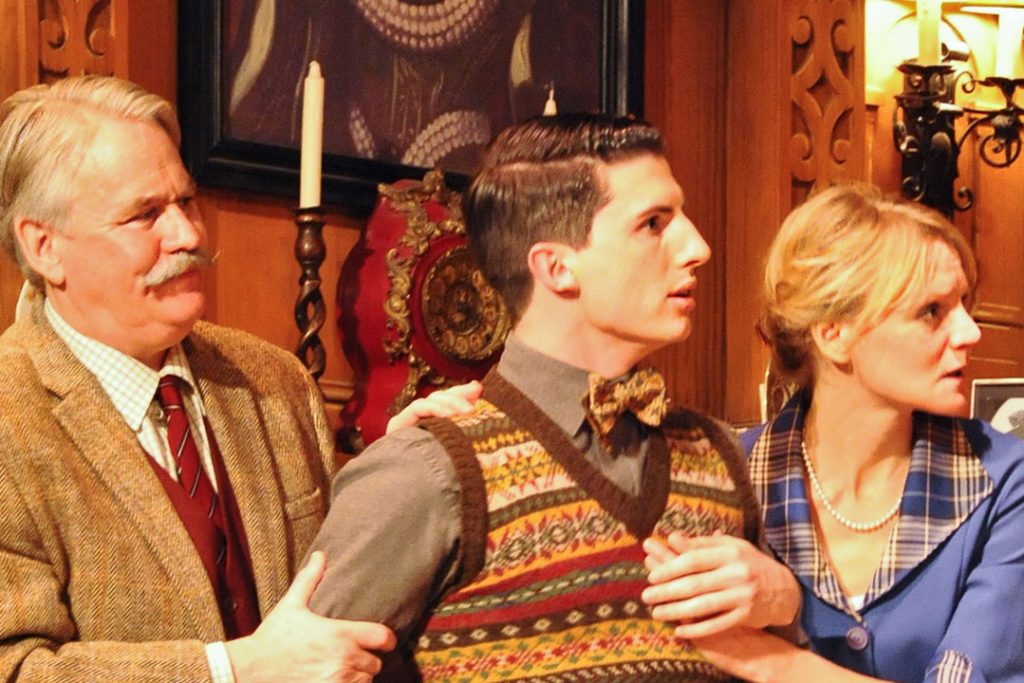 Amy Downham trained at the Royal Welsh College of Music and Drama and has appeared on stage in Generation Y (MF Productions), Twelfth Night (Attic Theatre Company), Out of Love (White Bear Theatre), Daisy Pulls it Off(Watermill Theatre) and Every Brilliant Thing (Nabokov). Amy has also appeared on TV in Doctors, EastEnders and Hollyoaks.

Oliver Gully trained at the Guildhall School of Acting; his previous stage credits include Hamlet (The Courtyard Theatre), A Midsummer Night’s Dream(UK Tour) and Timebomb (The White Bear).

Sarah Whitlock reprises the role of Mrs Boyle, having previously appeared in both the Far East tour and West End productions of The Mousetrap. Her other stage credits include No Sex Please We’re British (Strand Theatre) and Curse of the Werewolf (The Union Theatre), alongside UK Tours of Blithe Spirit, Keeping Up Appearances, Not Now Darling and Dry Rot. Her television appearances have included Filth, The Mary Whitehouse Story, Upstairs Downstairs, The Miss Marple Series and The Bill. She appears regularly in pantomime productions, with credits including Cinderella, Jack and the Beanstalk, Dick Whittington and Sleeping Beauty. She has also appeared at the Up The Creek comedy club performing her own stand-up routine.

Mousetrap Productions has also licensed 60 productions of The Mousetrapworldwide to mark the 60th year, and many of these have also broken records, from Cape Town to Philadelphia, Singapore to Sydney. During this period, the world’s longest running show will have been seen in every continent with professional productions in Australia, China, Korea, Turkey, South Africa, Russia, Czech Republic, Hungary, France, Germany, Holland, Italy, Poland, Spain, Scandinavia, Venezuela, and across the United States and Canada.