Review of: Stella at Hoxton Hall

Stella also raises awareness of the bravery and courage trans people and LGBTQ communities encounter daily, not only now, but also historically. Violence, threats and confrontations that are experienced and endured from passers-by and judicial systems that not designed to recognise genders beyond the masculine and feminine binary systems, are all key themes in this play.

Last night was a night of firsts. It was Stella’s first appearance in London at the LIFT festival, and my first time in one of London’s few remaining music halls. Stella was incredibly moving, and Hoxton Hall was quaint and charming. The lobby was vibrant with theatre-goers, chatter and impromptu twitter tutorials. While Stella’s writer and director Neil Bartlett, was kind enough to spend some time talking to me between posing for cameras and welcoming guests.

Neil Bartlett told me he hoped that audiences would see themselves reflected in his play Stella.

And while it is true that Stella offers a reflection of youth, ageing, fear and bravery to its audiences, what makes Stella particularly unique is its brashness in giving transgender or non-gender-conformist audiences a chance to also see themselves reflected on the stage. This is particularly significant given that trans visibility, in the mainstream at least, is very uncommon, shied away from or hidden altogether.

But Stella also raises awareness of the bravery and courage trans people and LGBTQ communities encounter daily, not only now, but also historically. Violence, threats and confrontations that are experienced and endured from passers-by and judicial systems that not designed to recognise genders beyond the masculine and feminine binary systems, are all key themes in this play. 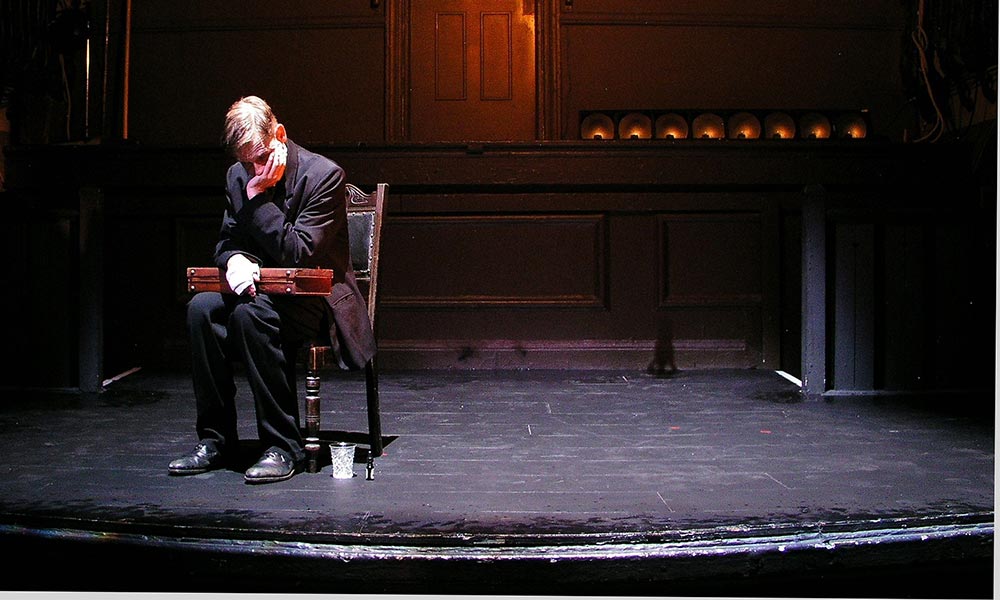 Gender then, is very much at the forefront. As is challenging gender stereotypes and conventions. In an interview earlier today, cultural historian and academic, Andy Medhurst, pointed out that “popular culture has frequently been a zone where the everyday straitjackets of gender identity can be shaken up, destabilised and subjected to both scrutiny and mockery.”

This was certainly the case for Stella – the person – who, as a performer found solace on the stage and within the popular cultural environment of the music hall. But also true of Stella – the play – where traditional gender identity is shown to be challenged and audiences are encouraged to analyse the credibility and authority of conventional gender norms.

Bringing Stella’s story to life in Hoxton Hall then, seems especially fitting. And it is done so convincingly by Richard Cant who plays Stella in her older years, and Oscar Batterham as the younger Stella. Side-by-side on stage, along with attendant David Carr, they retell, relive and recount the riotous and unrestrained life of Stella, a Victorian cross-dresser and performer. The audience gets a sense of how high she must have been during the good times and how low she must have reached during the darker times.  Stella is poignant and compelling, heart-breaking and touching. She is an awe-inspiring and immediately likeable character, who was so, very brave.

The lady sitting next to me was fortunate enough to be seeing Stella for the second time around. I was, and am, quite envious of this lady because Stella has the same effect on you as reading a really good book or watching a really good film. That feeling of knowing you have to come back to it, almost as soon as, or sometimes even before, reaching the end. Revisiting like this satisfies the nagging sensation of just making sure you’ve not missed anything from the first time, and affords the added privilege of looking for hidden details because the suspenseful outcome of the story has already been unveiled.  I still have this nagging feeling where Stella is concerned, and so I know I need to see it again.

This review was organised through http://theatrebloggers.co.uk/.