Review of: Slap and Tickle at the Place 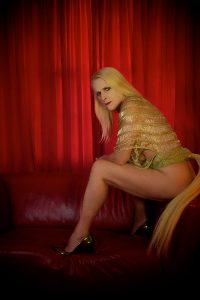 “Hello everybody. Are you sitting comfortably?” asks Liz Aggiss, recurrently throughout her solo contemporary dance performance Slap and Tickle. The assumption being that you ought to be, given you’re about to be blown away!

Slap and Tickle is a courageously daring representation of women’s lives and their bodies. It is sidesplittingly funny, entertainingly choreographed and spectacularly devoid of ordinariness or political correctness. There is a refreshing irreverence to Liz Aggiss’s performance that is rarely exhibited by female performers. As such, she resists all conventional gender stereotypes ascribed to what defines femininity, how it should be talked about, and how it should be performed.

The hour long performance is separated into three acts and act one begins on a darkened, misty stage that is accompanied by a moving operatic soundtrack. A spotlighted Liz Aggiss appears, cloaked in gold with a mushroom shaped head holding a puppet. She lifts her dress to reveal a glittering slipper that is clearly a few sizes too large, yet proclaims that “the shoe fits!”

She speaks into the microphone sometimes, at others away from it. The Cinderella and nursery rhyme references suggest this first act is both about birth and the early, formative years. So, it’s about a time of innocence and fuzzy cotton wool-wrapped worlds.

Aggiss uses her body, the music track, a small front section of the stage and a puppet, which on the surface may seem limiting, but these are the tools which allow her the means to confront and challenge audience expectations by doing something quite exceptional.

Using Doris Day’s popular 1950’s song “Que Sera, Sera”, Aggiss replaces the well-known lyrics “Will I be pretty, will I be rich?”, with “Will I be I be horny, always on heat, a bitch, beaten, shoved in a ditch, a victim and used?” The audience are at once placed in a challenged position of knowing that these questions are possibilities, and do actually happen to a percentage of young girl’s lives, but we are also unsure of how to process this information and what to do with it. Especially given that it is placed in a song so often associated with childhood purity and innocence, but also that these taboo realities of what might be, are very rarely discussed or talked about openly. This surprising position, ultimately leaves the audience in anticipation and very interested in what is to come from here on in. 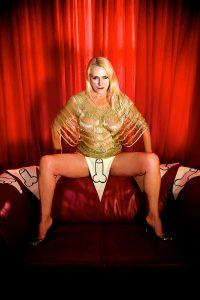 Act two is very much about the female body and Aggiss embodies the vulgar and grotesque without restraint. She uses her form, dance movements, a puppet and some cotton wool, along with her engaging style to demonstrate the various stages and secretions of women’s bodies. In this hilariously un-politically correct segment, Aggiss dances her way through, having babies, collapsed pelvic floors and weeing herself “all the way home”.

There are whoops of laughter at the hirsute wig used to represent pubic hair, audible gasps at the mention of cancerous holes, and uncomfortable uncertainty at the mockery of sexualising lactating breasts.

Aggiss returns to the stage in act three wearing a short red cloak and producing penis bunting from her pants. This last act sees her liberated, uninhibited and performing to Ian Dury and The Blockhead’s song “Reasons to be Cheerful” with sharply adapted lyrics. After some layers are removed, Aggiss ends bare-bottomed while at the same time farting and apologising for being “a little loose this way”.