This August, Bloomberg Summer at the Roundhouse, the annual season dedicated to introducing new audiences to innovative culture, returns for its fifth consecutive year with Curtain Call by internationally renowned artist, architect and designer Ron Arad.  Ron Arad’s 360° floor-to-ceiling installation is made up of 5,600 silicon rods suspended and filling the Roundhouse’s iconic main space. Alongside the installation the Roundhouse has announced seven unique music events, designed by an eclectic mix of artists to take place as one-off performances in and around the installation.

Beginning the series on 10 August, contemporary classical and experimental agent provocateurMatthew Herbert will present A NUDE with Lail Arad. The brand new piece is based around his new album A Nude (The Perfect Body), comprised entirely of recordings of the sounds of a naked body recorded in a room over 24 hours. As support for Herbert, Lail Arad will perform songs from her new album The Onion with specially commissioned visuals by Flo Kohl & Ellis Pendens.

The 11 August sees GAIKA present CLUB 88. GAIKA will bring his blend of grime, dancehall, garage, hip hop and R&B in an imaginary and immersive club experience, inspired by Akira, Brixton and SECURITY. The night will be part installation, part live performance and part immersive performance piece.

The following night on 18 August, critically-acclaimed Eska will present a mix of reggae, jazz, soul, choral and electronica in a performance which brings to a close the incredible journey of her Mercury Music Prize-nominated debut album.  Calling her presentation at the Roundhouse the album’s ‘fanfare’ the gig will be an opportunity for audiences to be fully immersed in the music, both in sound with Eska’s band and special guests and in vision, collaborating with the installation.

The BBC Proms return to the Roundhouse on 20 August with the renowned London Sinfonietta, led by conductor Andrew Gourlay, with a programme that takes its lead from Ligeti’s iconic Ramifications. This embracing score, for two groups of spatially positioned strings, is heard alongside music by one of Ligeti’s natural musical heirs, Georg Friedrich Haas, and other new pieces concerned with physical space. The concert will culminate in a major work from David Sawer that reflects the energy and physicality of dance.

On 24 August electronic music iconoclast Dan Deacon, world renowned for his live shows, will bring a brand new site-specific composition in which the audience will be the performers. Deacon is set to use the entire venue, both inside and out, as the stage with all audience in attendance contributing to the large scale performance event. 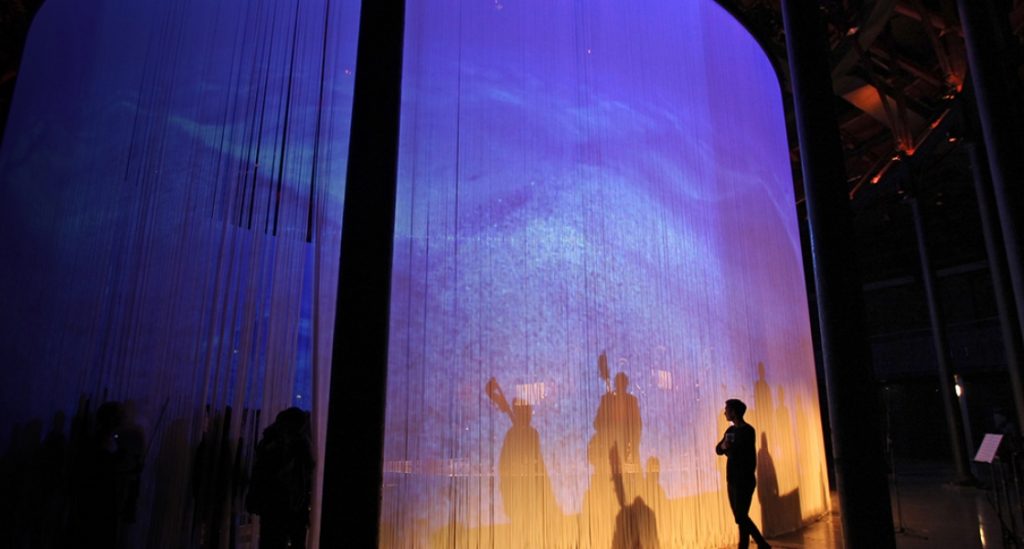 Bringing the live music performances to a close, the LCO will return to the Roundhouse to showcase two world premiere works – by CHAINES and Mica Levi – commissioned especially for Ron Arad’s installation. The premieres will be performed alongside Morton Feldman’s Rothko Chapel and John Tavener’s haunting Svyati for solo cello and choir exploring themes of spirituality, space and time.

Curtain Call will provide a canvas for films, live performance and audience interaction. Created by Arad in 2011 as a response to the Roundhouse’s dramatic main space, the 5,600 silicon rods are suspended from an 18 metre diameter ring. This summer, Arad will again invite artists, musicians and friends to create unique work for the installation. New artists for 2016 include: Kutiman, Marshmallow Laser Feast and Universal Everything. Returning from 2011 will be: Babis Alexiadis; Mat Colishaw; Ori Gersht; Greenaway & Greenaway; Gabriel & Shira Klasmer; Christian Marclay; Javier Mariscal; SDNA and David Shrigley.

Throughout the month of August, the Roundhouse will become a daily destination where members of the public can enjoy the sunshine at North London’s very own ‘seaside’ resort, Camden Beach, presented by Virgin Holidays. The Roundhouse will once again be filling its terrace with over 150 tonnes of the finest sand, deckchairs, beach huts, beach games, live music and some of the best food pop-ups in the city. Camden Beach presented by Virgin Holidays will be open to the public from Friday 29 July – Monday 29 August.

In 2016 the Roundhouse celebrates 50 years since opening as a groundbreaking arts venue and 10 years of using the arts to transform the lives of young people with its state-of-the-art creative centre. Bloomberg has supported the Roundhouse since 2003, and shares their commitment to supporting artistic innovation, ground breaking technologies and access for new audiences in the arts. In addition to the ‘Bloomberg Summers’ programme, Bloomberg also collaborates on the ‘Bloomberg Broadcast Programme’, a vocational skills-based training programme in broadcasting for young people who are not in employment, education or training.