Review of: Red Riding Hood and Other Lost Girls

Produced by:
The Crick Crack Club

Bold, bubbly and brutal, Nell Phoenix guides us through a plethora of girl-meets-wolf tales in a lively evening of storytelling. 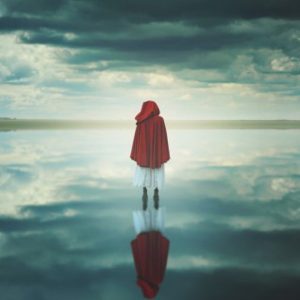 I must begin this review by saying that, owing to an information error, I arrived at this show after it had started, and though I was soon engaged in the story, it is possible that what I missed may have affected my impression of the performance.

A daring young girl goes into the forest to visit her grandma. She meets a wolf who devours said grandma. She is very nearly seduced into being eaten herself, then enlists help to butcher the wolf in a karmically brutal fashion. It’s a familiar story that’s been told for centuries in Japan and China, Europe and Africa, all the way to the Americas, changing a little with each culture and each storyteller it is passed onto. Each has something to say about overconfidence, about trusting strangers, and, less-than-subtly, about sexual awakening.

In her witty, engaging anthology of these tales, Nell Phoenix (in association with inveterate storytelling collective The Crick Crack Club) manages to make each one distinct while highlighting their similarities with her adept use of voice and phrasing. A natural storyteller, Phoenix is quick to form a rapport with her audience, using wry asides, piercing eye contact, and just enough participation to immerse us without feeling too demanding. The tone is well-judged, striking a balance between earnestness, cheekiness and nostalgia, and it was easy to see both adults and children in the audience relishing every moment.

It is possible that, as a stage piece, there was room for more theatricality in her performance. The lighting, costume and, to a certain extent, characterisation were all very straightforward. Whilst Phoenix ably held the audience’s attention, giving the show a little more visual panache would have improved its few patches of monotony, especially in later sections when narrative elements start to repeat.

This is, of course, a dilemma always faced by this type of performance, as it straddles the line between a recital and a one-person show. Regardless, Red Riding Hood and Other Lost Girls tells a tale and tells it well, achieving what it sets out to do with rousing success.

Red Riding Hood and Other Lost Girls was a one-off performance at the Soho Theatre, but look out for more events by Nell Phoenix and the Crick Crack Club on their websites: http://www.nellphoenix.co.uk/ and www.crickcrackclub.com.