Review of: Phaedra(s) at the Barbican Theatre

Phaedra(s) is unconventional, and certainly not for everyone’s taste. The echoes mentioned at the beginning were apt - there was a hollowness to proceedings, a recursive ringing that seemed sometimes haunting, yet also sometimes feeble and intangible.

Phaedra(s) is a performance that, in the cavernous space of the Barbican’s Main Theatre, echoes. Its vast, marble clad set, somewhat reminiscent of a generic French gare or terminal, becomes the host of three different, yet tonally similar, renditions of the story of Phaedra – second wife of Theseus, stepmother and lover of Hippolytus. The show is a strange contraption – each show slowly falling into a lilting teleological exercise – we know that Phaedra is doomed to a tragic fate, therefore faced with the prospect of watching it play itself over three times in varying circumstances.

Odeon-Theatre de l’Europe have certainly settled on an interesting concept, placing the three texts from Sarah Kane, Wajdi Mouawad and J M Coetzee in a straightforward three-act order (Kane’s Phaedra In Love straddles both sides of the interval). The triumvirate appear almost like a collection posed on a bookshelf, rubbing shoulders with one another, tonally influencing the other purely by association.

The show can only really excel if all three parts truly match one another in quality, and unfortunately this isn’t the case – whilst Kane and Coetzee’s pieces ooze philosophical and social commentary, Mouawad’s first act concoction is an entire aesthetic exercise – the actors bobbing and swaying, staring into cameras that project their faces over vast, blank walls. Dialogue is sparse, fragmented, and leans entirely on the audience’s patience. It is, at times, almost disconcertingly vapid – coming across as some form of homemade Gucci advertisement, lacing the play with words like ‘Beauty’ or ‘Innocence’, again beamed on the wall in vast white lettering. Here, Isabelle Huppert seems almost to be gearing up for the parts she has to play over the rest of the show rather than committing wholeheartedly to Mouawad’s premise – her Phaedra here is a waif-like creature, twisted and contorted by her own, unjustifiable, desires for her stepson. 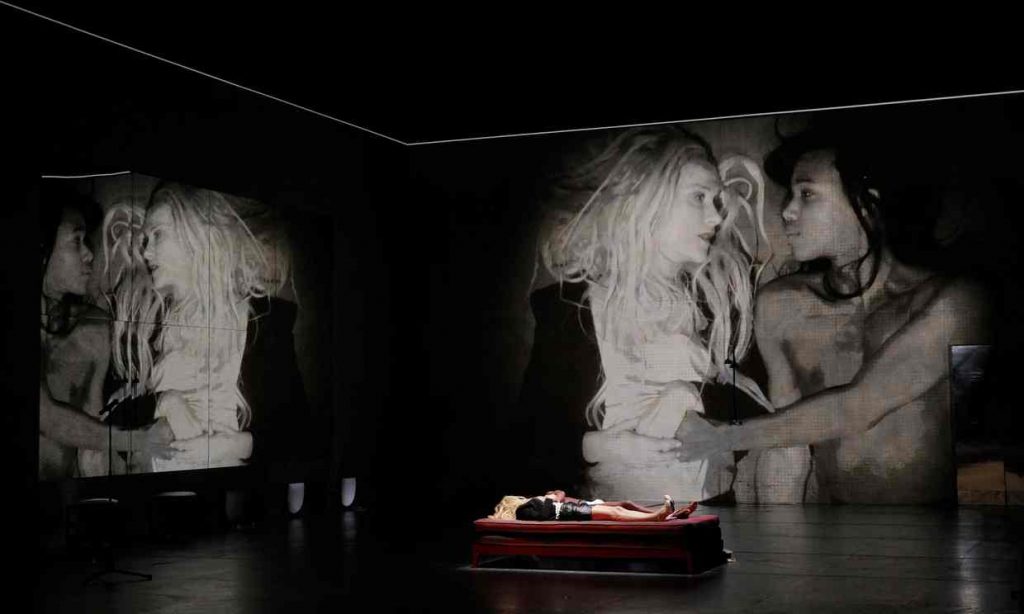 After holding through this first 90 minutes (a hefty chunk of the 220 minutes that Phaedra(s) runs to), Sarah Kane’s Phaedra In Love brings a newfound sense of meaty clarity to proceedings – here it is Hippolytus that takes the centre of attention, Huppert now becoming a more straight-laced, haunted mother battling through the relationship between her stepson and daughter. It is a shocking text, one teased apart with inventiveness by director Krzysztof Warlikowski – the final scene in particular, with Kane’s stage directions spoken aloud (since to perform them onstage would be near-impossible) and a static, photograph finish providing a perfect conclusion.

The third piece, adapted from Coetzee’s book on author Elizabeth Costello (played by Huppert, here a ferocious academic keenly dedicated to her own craft)  is delivered as an onstage interview, interspersed with video clips from films depicting explicit subjugation of women (also shown in Kane’s Phaedra, where a television screen toward the back of the state plays the shower scene from Psycho). Despite the overly static feel, it is an exciting prospect, laced with philosophical musing and a latent battle of wits that jerks back and forth. The main subject is a refreshingly novel one – sexual congress between deity and human, plus the practicalities and consequences of such a feat.

Huppert transitions between each character with an exhaustive commitment, transforming at every juncture to match the three, very different, Phaedras she is portraying. As transformative is the multifaceted set from designer Małgorzata Szczęśniak, a cavernous performance space that seems to impose itself on those treading over it – the actors dwarfed by the stark emptiness of their surroundings.

Phaedra(s) is laudably unconventional, and certainly not for everyone’s taste. The echoes mentioned at the beginning were apt – there was a hollowness to proceedings, a recursive ringing that seemed sometimes haunting, yet also sometimes feeble and intangible.

Phaedra(s) is performed as part of the LIFT2016 festival. More information and tickets available here.