Review of: People of the Eye

Produced by:
The Deaf and Hearing Ensemble

People of the Eye is sweet and charming, but doesn't pack the emotional punch expected.

‘People of the Eye’ is a charming exploration of the challenges of deafness – charming, but with peculiarly little actual substance to it. While providing an impressive combination of visual and aural stimuli (with a particularly interesting video feed), the show itself feels sadly like a very standard example of ‘a devised piece around a topic’. There are very interesting sections within the performance itself (such as the audience-orientated BSL lesson), but there doesn’t feel like there is any meaningful overarching plot, creating a noticeable lack of tension throughout the piece. ‘People of the Eye’ is more of a brainstorm of an issue rather than a theatrical piece – enthralling in sections, with imaginative ideas, but ultimately doesn’t give one any real emotional view into what it is like to be hard of hearing. 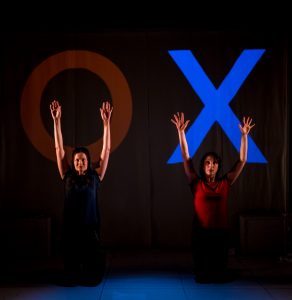 The show was constructed of different vignettes loosely based on the family of one of the performers involved; the personal touches that came out of this – such as the home video integrated into the piece – were some of the most successful moments in the show. The audience were made aware that the people in front of them on the stage did not want to be seen as ‘performers’ as such, but were trying to strip back that layer of character that so often sits between those acting and those watching. This effect was further enhanced when both Erin Siobhan Hutching and Emily Howlett came to chat to the audience during the interval, wanting to hear our thoughts on the show and the experience of those hard of hearing within the audience itself. This did create an intimacy between performers and spectator, but the detrimental effect of the was that, as the show progressed, one felt rather like one was watching a presentation or a tech-heavy TED talk rather than an actual theatrical performance. Knowing the two people onstage and realizing that they are ‘normal’ and ‘just like us’ does forge a certain kind of anti-theatrical connection with the spectators, but sadly a connection which is thrown into confusion by the intense lighting, loud sound effects and stunning film design, which were all intensely performative. The combination of these very scripted, tech-heavy theatrical moments jarred quite heavily with the casual intimacy the performers seemed to try and create.

It is perhaps because of these flaws that this attempt at showing a deaf person’s experience of everyday life could be labelled as interesting and educational, but it didn’t linger in the mind. It showed the vague, generalized difficulties of those hard of hearing, but it might have been more interesting had the problems portrayed onstage been more specific – concentrated in showing one individual person’s battle with hearing rather than giving an ‘impression’. One of the downfalls of the constant character swapping was that the audience never really connected with the characters portrayed; instead, the piece led them to focus on the performers themselves. This would not necessarily be a problem, but the fact that the problems and fears associated with deafness are only shown when either Hutching or Howlett is ‘pretending’ to be a different character actively alienates those watching from the troubles they are portraying. One couldn’t help but wonder whether this show would have not worked better in a smaller, more intimate venue – such as a pub or garden – where the lines between audience and performer are not as strict as in an actual theatre, and this fluidity between what it is to be a ‘performer’ and what it is to portray a different ‘character’ could have potentially been further explored. ‘People of the Eye’ was ultimately very sweet and charming, but ultimately didn’t pack the emotional punch expected.