Last night saw the opening event for the inaugural London Clown Festival, held at The Omnitorium – a derelict North London car park transformed into a 100-seat arts community and venue. Hosted by the cult foul-mouthed puppets Boris and Sergey, this free Caberet-style event showcased a taste of the talent on offer at the Festival – and an indication of the Festival’s particular and peculiar appeal. 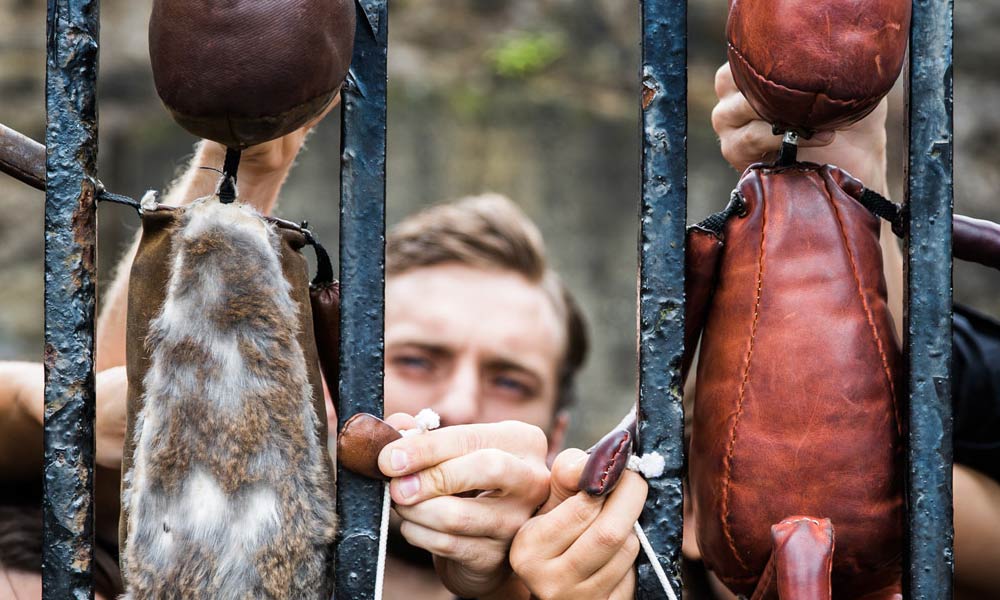 Let’s be clear – the London Clown Festival is an utterly lovely thing, celebrating the offbeat and the bizarre with a down-to-earth generosity that is reflected in the Omnitorium’s ramshackle architecture. With many shows priced at no more than five pounds, it is hard to think of a festival more successful at evoking the atmosphere of a community celebration over that of a commercial venture. If you’re looking for the true Fringe, this is the genuine article.

Co-editor Alex Wood and I joined an eclectic audience of clowns, performers, puppeteers and punters treated to micro-performances from The Establishment, Ken Do, Inda Pereda, Ben Target and Helen Duff.

The clear highlight of the evening came for me from first-time clown-performer Inda Pereda. With similar appeal to master-mime Trygve Wakenshaw, Pereda displayed panache in pursuing a single, simple, stupid idea for almost the whole duration of his slot. It takes courage and real creative confidence to take this amount of time to develop a single skit with an audience without seeming to rely on preplanned punchlines – and the results were demented and utterly delightful. He performs today at 4.45pm – make sure not to miss this master at work!

Clowning is at its best when an audience feels that anything can happen, and that whatever happens will be joyful. This kind of spontaneity was handled ably by clowning duo The Establishment, whose improvised repartee with each other and with the audience was a joy to behold. Similarly, Helen Duff’s breathless comic monologue on bikini waxes, poor planning and “the circle of shame – and trust!” was a tour-de-force which managed a surprisingly strong comic structure without losing the spontaneity of the stream-of-consciousness.

She had a difficult act to follow – Ash Perrin, from The Flying Seagull Project, who took to the stage in the second half to talk about the work the clown charity does with refugees in Greece. A recent JustGiving campaign run by The Flying Seagull Project raised £4,000 for their Refugee Relief Project, which aims to use clowning and workshops to bring joy to the children whose lives have been destroyed by the refugee crisis.

In the bar before the show, a petition was circling with signatures to prevent the space from being transformed (or un-transformed) back into a car park. Please support the Clown Festival – London needs more communities like it. It does not need more derelict grey space. Furthermore, you’d have to be a fool to miss it.