Review of: No Villain by Arthur Miller

Transferring from a world premiere at The Old Red Lion Theatre to Trafalgar Studios 2, Sean Turner's production is a sensitive and traditional interpretation of Miller's lost play, that nonetheless emphasises its timeless nature and the cyclical nature of the problems it explores.

The young Arthur Miller must have been a fearsome person to behold. No Villain was the playwright’s first dramatic narrative, written in 6 days at the tender age of 20, and yet far from presenting a faltering, embryonic version of later greatness, his voice emerges fully formed and enviably nuanced. Transferring from a world premiere at The Old Red Lion Theatre to Trafalgar Studios 2, Sean Turner’s production is a sensitive and traditional interpretation of Miller’s lost play, that nonetheless emphasises its timeless nature and the cyclical nature of the problems it explores. 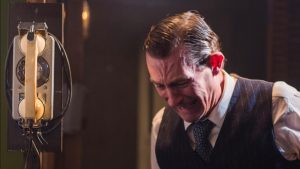 Self-described as autobiographical, Miller’s first play clearly follows the adage to ‘write what you know’. No Villain focuses on an American Jewish family pushed from relative economic prosperity into reduced circumstances. Struggling with their son’s Communist principles in light of an industrial strike action that threatens to ruin their family business, the play explores the turning point at which sons out-educate their fathers, and the personal ramifications of the American industrial downturn on this symbolic family. Turner’s direction expertly allows room for the audience to make a multitude of connections with Miller’s later work; Esther and Abe are a prototype Linda and Willy from Death of a Salesman, whilst the characters’ exploration of Communism sticks in the throat more sharply, as a foreshadowing of Miller’s later struggles with McCarthyism.

The cast work generously with each other, switching between heart-warmingly ageless scenes of family comedy and full-tilt emotional explosions as their world begins to crumble. David Bromley, as the father Abe, is particularly masterful across the huge range demanded for his part, but it is George Turvey who shines brightest as younger brother Ben. Unafraid to step back into supporting roles when scenes demand, he also delivers a powerful emotional performance against Bromley, his earnestness heightening the family’s desperation at the climax of the narrative.

The character of Arnold, as Miller’s walking self-autobiography, is surprisingly sidelined; whilst a key motivation in the development of the plot, he is off stage for significant lengths of the show, and is principally defined by his refusal to take action. Perhaps a result of Miller’s reluctance to write himself lines, Arnie is a palpable observer, and as such, Alex Forsyth does not get much opportunity to develop his performance. As a newly-Communist ‘college boy’, what a young Miller may have intended as a more inspirational character comes across as a petulant, detrimentally-principled youth. Arnie’s character could have benefited from more sympathetic portrayal.

With a versatile, richly detailed set from Max Dorey, the play is firmly placed in Miller’s historical period. Natalie Pryce’s costumes were extremely well detailed and thought through – from straining button holes on a grandfathers cardigan, clearly bought in earlier decades for a slimmer figure, to the play on hierarchies across the different styles of male suits. Period though the visual language may be, the issues raised by Miller are eerily relevant for the modern audience; newly acquired, rebellious political principles that go against parental beliefs (and develop at university). Ben’s exploration of the dysfunction of higher education, its meaninglessness and circularity. Perhaps most importantly, the everyday, unseen impact of economic downturn that became the hallmark of Miller’s later work, and is none the less important for today’s generation.

No Villain will be continuing its run at Trafalgar Studios until 23 July 2016. You can book tickets here