Harrowing and human, this soldiers' eye view of the Falklands/Malvinas War juxtaposes theatricality and honest retellings

First, a confession: while I prefer going into shows blind to avoid prior conceptions tainting them, I perhaps should have read about this particular show’s background a bit before watching it. Having seen several excellent pieces of testimony theatre, I assumed that the performers were actors who were retelling soldiers’ stories from the Falklands/Malvinas War through music, montages, monologues, and re-enactments. About halfway through, I realised that the soldiers themselves were on stage, narrating and performing their own stories. Suddenly what was already a polished, moving, engaging, interrogative performance became intensely personal and honest, taking an already excellent show to a new height.

Minefield begins with the soldiers/actors – who have gone on to several pursuits and occupations after the Falklands/Malvinas war ended – performing their first days in the military and ends in the present day. Every event, thought, and milestone is described, performed, and reflected on, yet this thoroughness and searching holds the audience spellbound instead of dragging down the action. This superb play may use a film set conceit to bring its three Argentinian and three British cast members together (not to mention some meta-narration talking about scenes and ideas which didn’t make the cut), but the intensely human retelling neither exaggerates nor glamorises. Simply put, this is a stunning show. 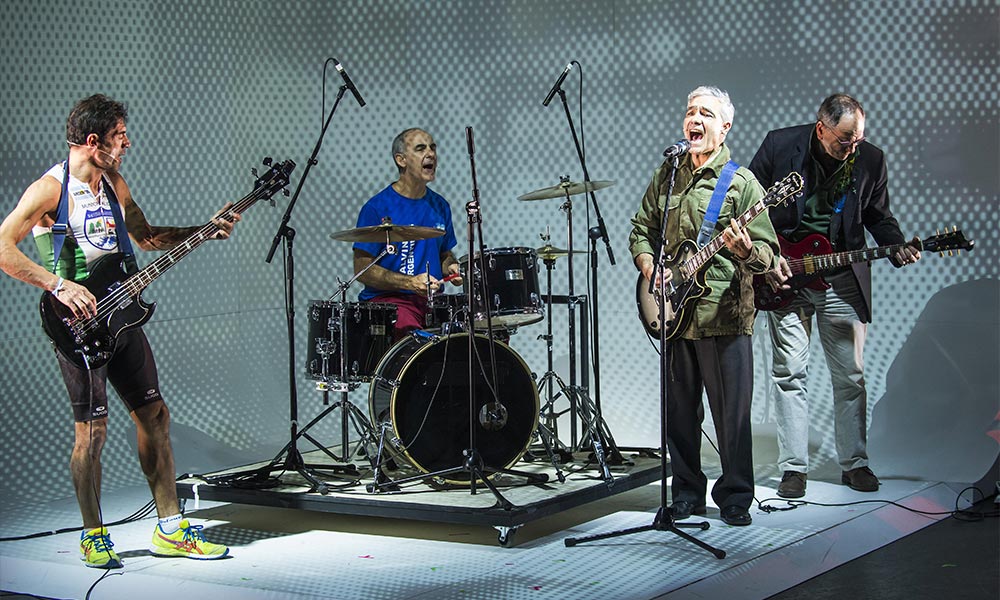 The stories that are told and the performers themselves cannot be critiqued in any way: they are all true and real and flawless. Minefield, however, goes beyond just having the soldiers talk about their lives, thoughtfully and effectively including live broadcast of performers, miniatures, and documents; masks of Maggie Thatcher; historical footage; and live music performed by the actors. While the structure is roughly chronological and signposted by projected titles, the style varies between contained scenes and ‘breaking the fourth wall’; the viewers are both entirely removed and complicit. Most remarkable perhaps is the use of language; the Argentinian actors speak in Spanish (with English surtitles broadcasted) and the English actors in English (with Spanish surtitles broadcasted). This bilingualism lends a further veracity underneath the theatrical conceits mentioned above – a testament to the production’s rigour and commitment to telling both sides of the war.

Despite the topic, the show is not always dark; several moments, such as when David laments that his original song is not included in the show, elicited laughter from the crowd. Humour is included in a very human way; people make jokes in all situations, and to remove this truth from the storytelling would have been detrimental to the balance.

The precision and perfection with which Lola Arias has directed these men in telling their stories injects the ideal balance of theatricality into the narration; both enhance each other and create a quiet, understated brutality. While, as the final song reveals, most of Minefield’s audiences will never experience anything like what these soldiers/actors went through, their willingness to reveal and explore their memories ensures that their struggles will not be forgotten.