Review of: Handle With Care

Produced by:
Dante or Die

A clever and emotional telling of a modern woman’s life story, but sadly undermined by the misuse of various stylistics gimmicks that detracted rather than added to what is a show full of potential.

Dante or Die’s immersive production of ‘Handle With Care’, staged in and around the storage units at Urban Locker, is a mostly successful telling of a modern woman’s life from 1988-2016 – told through the objects she attaches importance to through these years. The choice of creating such a show in what are the rather cramped conditions of a modern storage industry is a brave one, seeing as it alters the physical spaces in which both the performers and spectators usually exist. The actors are boxed in by those watching, frequently having to reach behind one spectator or the other to get a prop that is needed, however also forced by the play to resolutely refuse to acknowledge any audience member’s existence. The atmosphere this creates is actually quite alienating, as having someone who is 20cm away ignore you is much more noticable than if they were on a stage 5m away. As a very close audience member, one is totally aware of the fact that the actors are ‘pretending’ we are not there – the creation of suspension of disbelief is far harder to achieve. This is one of the main pitfalls of the production; surely when leading an audience around and relying so much on their perspective of things, they should be worked into the show with a bit more finesse? Immersive theatre is not only about immersing the audience into a space, but actively immersing them into the actual world of performance. The intensely naturalistic setting of ‘Handle With Care’ contributed greatly to the story of the performers, but had the opposite effect on the audience themselves. 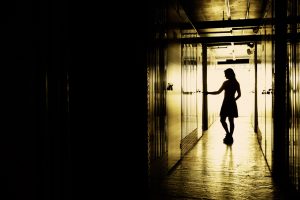 However, desipte these flaws, the acting and the presentation of Zoe’s story was wonderful – choreographing costume changes into the development of the plot itself was a stroke of genius, as was the imaginative use of the cramped corridors in the storage unit. Seeing Zoe running up and down these had a rather filmic effect, seeing as the action was framed so beautifully by the lines and stark right angles of the metal boxes surrounding her. If the production had kept to the rules they set up at the beginning – when moving, the action is somewhat more abstract, but when we are still, naturalism reigns – it would have been far more successful. There seemed, however, to be a penchant for introducing rather off stylized sequences, such as the rewinding of seconds of action only to play them out again, and slo-mo dance sequences. Slowing things down might work when on a stage, where the worlds of the audience and performer are clearly delineated, but when an actress is dancing in slo-mo only a few centimetres from you, the artifice is much more obviously visible, which undermines the gorgeous naturalism of most of the scenes.

This show is most obviously at its best when it creates its own memories – the smell of deoderant and the shirt that belonged to Zoe’s brother, Mikolas, travelling with the audience through the play, creating different memories in everyone watching, actively creating that which it is exploring. Watching Zoe interact with the shirt and the tape throughout the show is quietly heartbreaking, as her memories are also our memories – creating a fragile, haunting connection between audience and performer. However, these moment of genius are undermined by the portrayal of ‘false’ memories, such as a rather clunky way in which Dante or Die attempt to show us of a Zoe and her divorced husband’s past Christmas – including an odd flash-back including a box full of Christmas lights that didn’t connect emotionally with the audience at all, and, again, tainting the quiet beauty of the simple scenes that preceded and followed it.

Technically, however, ‘Handle With Care’ was almost completely flawless – the soundscapes and sound design were incredibly beautiful and added significantly to the telling of the plot, never feeling like there were there just for the sake of thing. Mention must also go to the Stage Management team – having to run three overlapping shows every night, with props appearing seemingly magically in aisles and units, all organised and placed invisibly, away from the eyes of the audience. It seems a shame that a production with such splendid component parts doesn’t quite succeed when placed in front of an audience. ‘Handle With Care’ is a show full of potential, but fails in its stylistic gimmicks which draw attention away from the beautifully-crafted scenes themselves.