It’s the time of year for Theatre Bubble to begin publicity for the Edinburgh Fringe – the largest arts festival in the world.
After the 5 star sell-out success of The Fantasist in 2015, physical theatre ensemble Theatre Témoin return to the Edinburgh Fringe with The Marked. Using mask, puppetry and physical theatre, the play navigates a world inspired by real-life stories of homelessness. The Marked performs at the Pleasance Dome from 3rd – 29th August, with a break on the 17th. 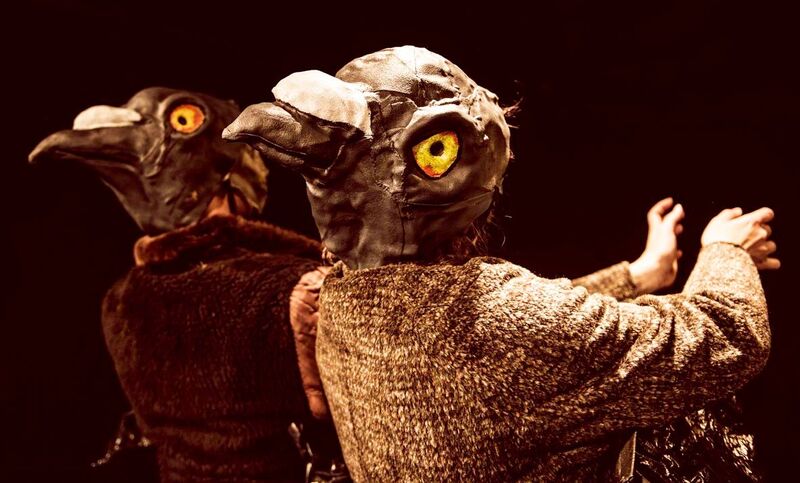 Theatre Bubble: What was the inspiration for The Marked?
Theatre Témoin: I wanted to explore was the individual stories of people who happened to be, among many other things, homeless, and crucially what was happening inside of their heads.  And I think if I’m honest I wanted to better understand something I had seen in 2012 in a group of child-combatants-turned-poets who I worked with in Rwanda–the incredible relationship between poetic, creative, mythological thinking and the ability to bounce back from the darkest–for most of us unthinkable–traumas.
We started with a very extensive process of mask-making workshops with people with experience of homelessness over a year and a half at Cardboard Citizens and St. Mungo’s Broadway, kind of poking at this question of personal mythology and the role it has in processing our past and constructing our future. We had two workshop participants who came onboard as paid collaborators, script writers, and experts-by-experience. One, Sarah MacGuire, is a talented poet and help shaped a great deal of the narrative and language. She also named the show.  Our other collaborator has asked to remain anonymous but he provided inspiration for a lot of the spirit of the show, particularly the character protagonist.
In terms of the story, at the same time that we were running the workshops, we were consuming as much as we could via articles, books, etc, and we stumbled across an article online that emerged as the backbone of this piece.  The article, “Myths Over Miami” (you can google it), was written by an American anthropologist working with Miami street youth in the 90s.  What she discovered was that this network of kids had developed a sort of “Urban Mythology”, this weird hybrid belief system that borrowed from urban legend, adult religions, and childish magical thinking to produce a kind of map to make sense of the experiences they were having, and, crucially, to give hope and meaning in situations where–strictly statistically speaking–there didn’t seem to be much if any.  Things like, “On Christmas Eve two years ago, God had to run away from Heaven in a UFO.  Now the angels are on earth Battling the demons.  The demons can possess adults and make them do bad things, so you have to help the angels by being good when you can.  When you die, you become an angel, and you get to fight on their side, but it’s a losing battle.”  I mean, this is like, Viking stuff.  It sounds like Valhalla.  But that makes sense when you think about it–you’re dealing with kids who are leading incredibly violent, unstable lives and are vulnerable to adults who are unpredictable and often dangerous.  Their lives, experiences, and the particular psychological challenges these come with, might explain why their mythologies are so fatalistic and also so personally and spiritually significant in terms of providing fleeting pockets of hope through noble living. 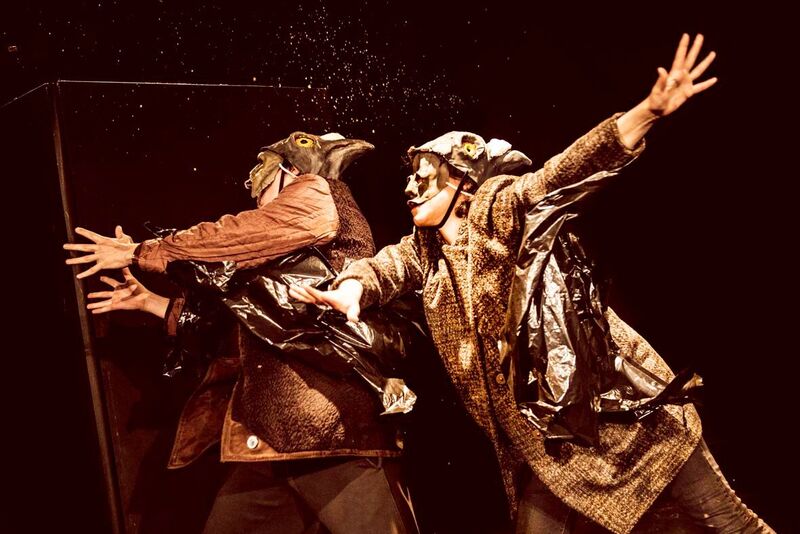 TB: Theatre Temoin focuses on creating socially-engaged work. How do you choose the subject matter for your work, and how does the devising process begin?
TT: At the risk of sounding pat, we don’t choose our subjects, they choose us.  What we choose is stories, but the subject emerges from them.  When we first began working with Grafted Cede Theatre on Nobody’s Home, what we knew we wanted to look at was The Odyssey. We looked at that, and we looked at the news items coming out about post traumatic stress disorder and the internal monsters our current soldiers were battling and the “subject” just became clear.  Then we started working on a puppetry piece around the story of Bluebeard.  At the time I happened to be working with two artists who both had bi-polar family members, and the story kept organically veering off track towards the story of a protagonist with bipolar disorder.  The piece that emerged came so far away from the Bluebeard story that we ditched the original concept and renamed the piece “The Fantasist“.  That “subject” chose us too, albeit in a very different way, because we didn’t actively choose it, at least not consciously.
TB: I am interested in hearing about where you think politically/socially-engaged work and your use of mask and visual forms intersect. Did your engagement with one emerge out of your interest in the other, or is this a chicken-and-egg question?
TT: I think they run parallel and are complimentary but aren’t causally linked in anyway.  I know a lot of stunning visual artists who couldn’t care less about social engagement, and know a lot of incredible socially engaged artists who have a very different theatrical language or approach to making work to ours.  I think one benefit of a visually poetic approach is that it’s a fast-track to the realm of empathy, awe, and emotion.  You can defamiliarise a “issue” by taking it out of the realm of language, where all of our entrenched understandings, defense mechanisms, and opinions tend to hide.  Sometimes I struggle to talk and write about “social engagement through theatre” in a way that really articulates the work.
Take The Marked, for example: it’s an adventure story, right?  Overcoming your demons (especially if they’re so epic that they haunt you to the point where you end up on the streets) is an epic, heroic task. The audience can expect to experience the same thing they’d experience watching any visually stunning and emotionally powerful adventure epic. I think people can mistake what kind of play we’re presenting when they read the word “homeless” on the flyer. We had the same issue when we brought The Fantasist–people saw “bipolar” on the flyer and thought it was going to be some kind of clinical kitchen-sink issues play. But I’m interested in visually presenting subjective experience. The subjective experience of bipolar illness is an absolute visual and emotional feast, it’s a whirlwind. As is the subjective experience of surviving trauma. Or, if you like, the subjective experience of “homelessness”.  It’s a hellova ride. 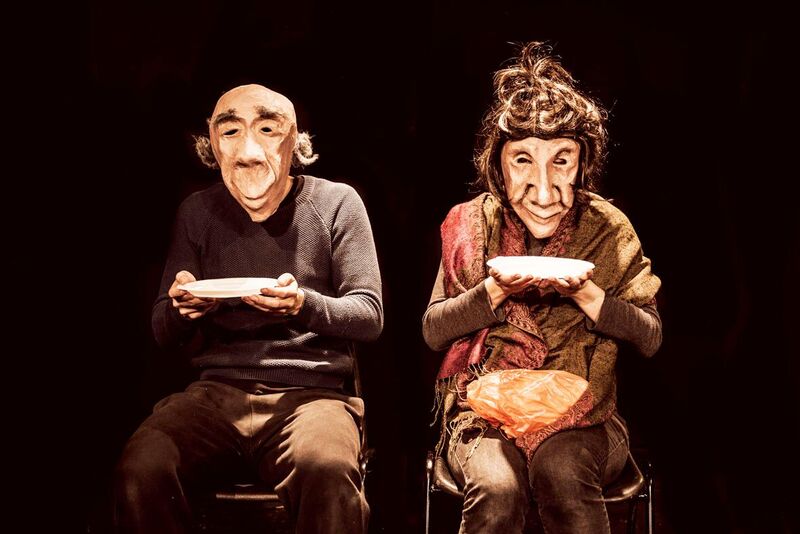 TB: What are you looking forward to most about the Edinburgh Fringe?
TT:  month of watching theatre, and my Pleasance pass!  Is that totally dorky?  Five years ago it was the beer and burgers meeting the other artists, and of course I really still look forward to that, but it’s a marathon, this “career in the theatre” thing, and I find more and more that what gets me through the long hard days is that one show (out of 50, maybe), that really opens something, shows me a new possibility or insight or feeling.  Without those shows I don’t think I’d see any point in carrying on making theatre.  You have to be moved and changed by it sometimes, to have that experience, so you know that your theatre might just do that for someone else.  Otherwise, what the heck is it all for?
TB: Why should Fringe audiences come and see your show?
TT: Because Jack has an amazing story.  He’s lived epic things, which we have put on stage not to preach or teach, but just to share.  Jack’s story is incredible, fantastical, and inspiring and who knows, it might just open something new in you.
Buy tickets for The Marked here