Review of: Christie in Love at the King's Head Theatre

Christie in Love is unsettling yet, as is often the case at the King's Head, unmissable theatre.

Midway through Christie in Love, currently playing at the King’s Head Theatre, a demonic, sadistic and putrid figure emerges from beneath the surface of a pool of newspaper, a bulbous mushroom covering his head. As he stands, he pulls a black, slender phallic object from between his trousers, twisting it up and connecting it into amorphous skull. This is how we are introduced to the serial killer John Christie – not as a man, but as a mythical beast, emerging like some cursed soul from hellish existence.

Director Mary Franklin excels in this regard – taunting us with some extravagant, twisted depiction of a faceless serial killer before revealing Christie the man himself – a small, emasculated figure (played with cowering nuance by Murray Taylor). As Howard Benton’s text explores, Christie, responsible for 8 killings over the course of 10 years between 1943 and 1953, yet simply a woefully and tragically flawed man capable of horrific deeds. As the hour-long performance goes on, we see this full examination of his emasculated and contorted mentality presented on stage.

Brenton’s Britain is one choking in masculine excess, from the limericks of the police constables through to the flippant discussions of ‘tarts’ – Christie’s victims. In a play where women are rendered corpses – inert figures, almost symbols and icons (and at one stage becoming real life puppets to be manipulated by men) this was a marvellous deconstruction of a patriarchal environment, even bringing in the after-effects of the First World War to further heighten the nature of Christie’s deeds. Franklin has taken these ideas and run with them, particularly with her phallic imagery and puppetry – the female puppet looms over Taylor, an idol almost mocking his lack of physical stature.

Christie in Love is a powerful, haunting text, one that perhaps, with the ravishes of time, has gone from a more pertinent story to something akin to a black comedy. Certainly Daniel Buckley and Jake Curran, members of the constabulary, embellish their early performances with vocal, rhythmic and physical humour, almost leaving the audience unprepared for the murkier, more gruesome sequences to follow. At some points this tonally felt almost gratuitous, and the laughter grew more and more uncertain as the play went on. 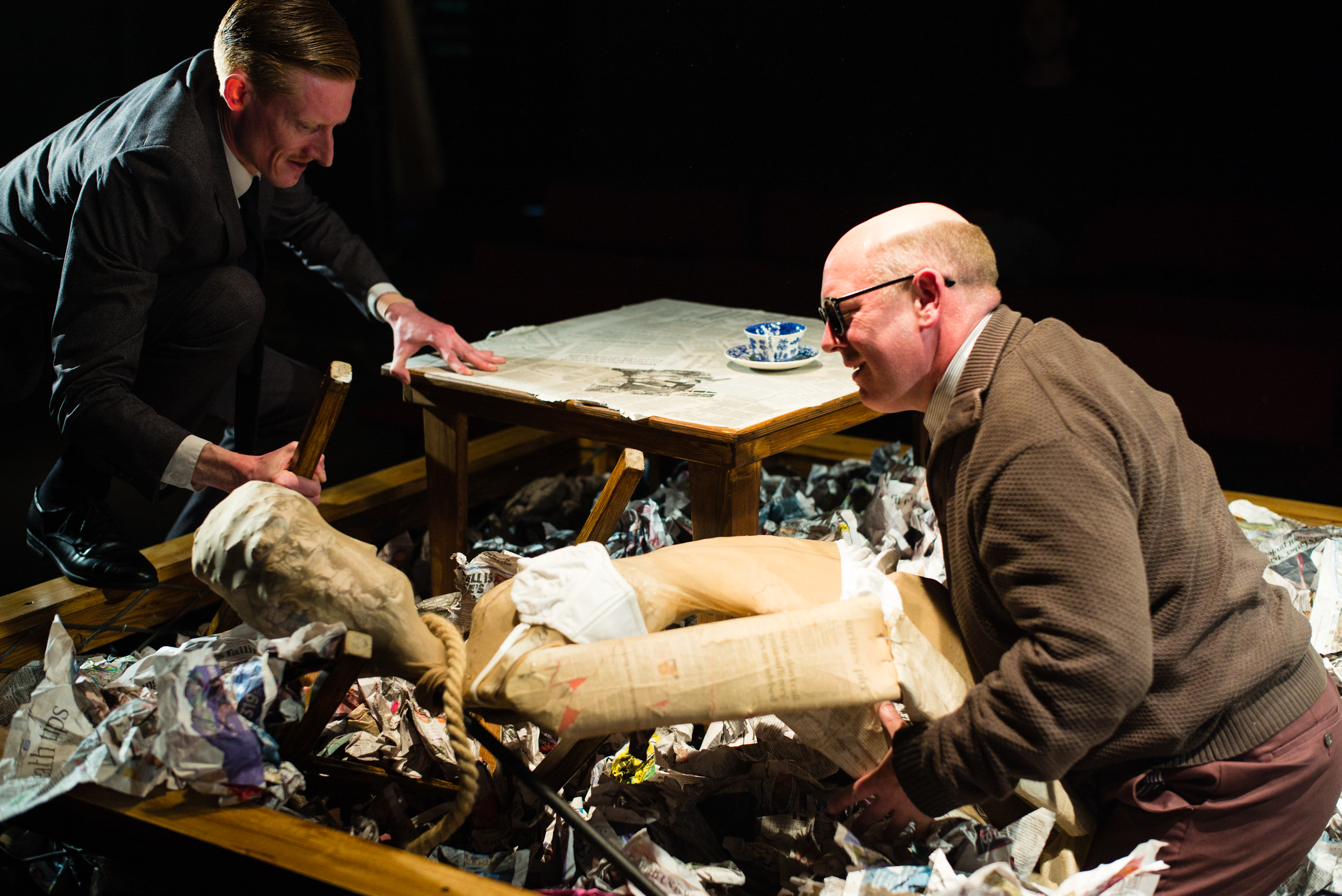 The show is one of two halves – the first being a slow, meandering double act from Buckley and Curran that establishes some of the key themes of the performance. Whilst both performers handled this lengthy episode (replete with extended pauses and little movement) with ease, it did leave a small degree of frustration knowing that at some stage the dam would break and the shocking details would spill forth. The second half did indeed do this brutally emphasising the full extent of Christie’s murders with rapidity and preparing him for his execution with teleological inevitability. An odd pacing quirk, and one that seemed to unbalance the show somewhat, but this may have been an issue not simply with the production but also from the original text.

A vital and incredible part of such an elusive yet powerful show comes from designer Christopher Hone, who succeeded in constructing a vast, newspaper filled pit (containing various objects and characters). It dominates the stage, revealing artefacts and bodies with sporadic necessity. It goes from a symbolic prop, to a grave, to a shockingly relevant contraption (Christie, after all, covered his victims in newspaper) and stood out as a focal point for the performance.

Brenton’s show is a cruel performance, and we  find  no solace or respite as it progresses and concludes. (David Hare, who helped commission the piece, felt it was in tune with an ‘apocalyptic’ vision of the late 1960s Britain) It was almost twisted to a point of grotesque revelry. Unsettling yet, as is often the case at the King’s Head, unmissable theatre.

Christie in Love will be playing at the King’s Head Theatre until June 18th.